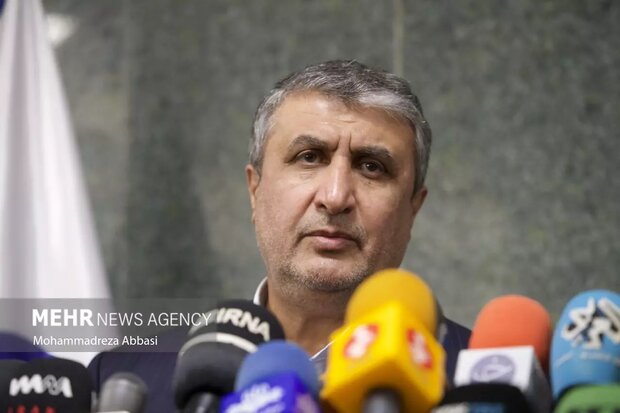 Stating that Leader of the Islamic Revolution supported nuclear science and technology for years, Chief of Atomic Energy Organization of Iran said that Iran has presently become self-sufficient in nuclear fuel cycle.

Speaking in a specialized meeting entitled “Impact of Strategic Measures Introduced by Leader of the Revolution on Advancements of Nuclear Technology”, held virtually in holy city of Mashhad on Wednesday, Mohammad Eslami said that Iran has witnessed extraordinary rapid progress of science and technology in all fields especially nuclear technology.

Even before the glorious victory of the Islamic Revolution, when superpowers were supposed to build facilities for Iran, they stopped construction of projects and did not fulfil their obligations due to the conditions of the Revolution, he said, adding that Leader of the Islamic Revolution threw his weight behind the advancement of nuclear science and technology since years ago and all-out support of the Leader caused the country to achieve salient progresses in this field and presently, the country has become self-sufficient in nuclear fuel cycle.

Elsewhere in his remarks, AEOI chief referred to the products of the country in the fields of health and radiopharmaceuticals and said that, unfortunately, enemies of the country have left no stone unturned to prevent Iran from accessing nuclear technology for peaceful purposes and if it were not for the support of Leader of the Islamic Revolution, Iran would not have achieved such progress in this field.”

Iran’s development programs must move forwards without any interruption since the country has benefited from talented youth, he added.

Eslami also noted the enrichment of uranium to 20% and 60% to produce fuel is continuing in Iran.