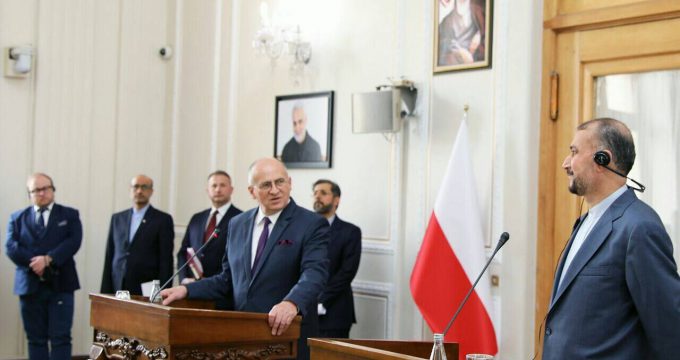 Iranian Foreign Minister Hossein Amirabdollahian said on Sunday that the Ukraine crisis has a political solution, adding that Iran is against the war in Ukraine as opposed to the war in Yemen.

Amirabdollahian met and held talks with his Polish counterpart Zbigniew Rau in the Iranian capital on Sunday.

In a press conference with Polish Foreign Minister Zbigniew Rau held at the Ministry of Foreign Affairs, Amirabdollahian said that Iran and Poland have a long-standing and historical relationship that dates back to 540 years ago, and this is a great asset in the relations between Tehran and Warsaw.

He added that Poland played an important humanitarian role in the Ukraine crisis in recent months, both for the displaced people of Ukraine and on the issue of the immediate transfer of Iranian nationals at the onset of the crisis from different parts of Ukraine to Poland and from there to Iran.

Referring to the great economic potential between Iran and Poland, Amirabdollahian highlighted that in today’s talks, they agreed that the joint political committee of the two states will hold a new round of meetings at the level of political deputies of ministries and general political directors within the next three months.

During the visit of the Polish Foreign Minister, a document on cultural, sports, scientific, youth, and media cooperation will be signed, which is a comprehensive document, the Iranian senior diplomat said.

Pointing to Poland’s Foreign Minister’s positive and constructive ideas in the fields of parliamentary diplomacy, Amirabdollahian noted that over the next month the head of the parliamentary friendship group of the Islamic Republic of Iran will travel to Warsaw at the head of a delegation.

Referring to the regional developments and the Ukraine crisis, he underlined that Iran opposes the war in Ukraine, just as it opposes the wars in Yemen, Afghanistan, Syria, Iraq, and anywhere in the world.

He went on to say that the solution for solving the Ukraine crisis is political and the political negotiations between Ukraine and Russia should lead to a halt to the crisis and the establishment of a ceasefire in the country as soon as possible.

Rau, for his part, said that when the Vienna talks end, they will try to increase Poland’s economic and trade cooperation with Iran because they believe Iran has a high potential.