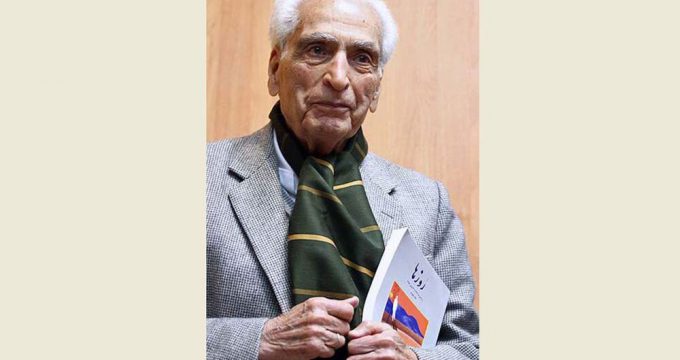 Mohammad-Ali Eslami Nodushan, a top Iranian poet, writer, critic and lawyer, died on Monday at his home in Canada at the age of 97.

“He left this earthly life yesterday,” his widow, Shirin Bayani, told the Persian service of ISNA on Tuesday.

“He had been weak with complications related to old age over the past five years and departed from us after a two-day illness,” she said.

“Mohammad-Ali lived a nice, comfortable and honorable life and left the world very peacefully,” she added.

Bayani said that his funeral will be held in Canada based on Islamic traditions.

Born in Nodushan, a town in Yazd Province, he left his hometown for France to study private international law. He then returned home and began a teaching career in law, literary criticism and comparative literature at the University of Tehran.

He spent his life studying the scientific and literary works of Iranian writers and translating books by the world’s great writers, all of which have been published in over 50 books.

“Iran’s Conscience: Ferdowsi, Rumi, Sadi, Hafiz” is one of his wonderful books. This book covers a series of lectures Eslami Nodushan gave at the Book City Institute in Tehran in the late 1990s.

His studies on Persian poet Hafez are among the most useful sources of information for Persian literature scholars. Among them are “Endless Story of Hafez” and “Contemplation on Hafez”.

Some of his massive studies on the Shahnameh (The Book of Kings), the epic masterpiece of the Persian poet Abolqasem Ferdowsi, are contained in the books “The Story of Stories: Rustam and Esfndiar in the Shahnameh” and “Heroes’ Death and Life in the Shahnameh”.

“Days”, his autobiography covering his life story from age 4 to 53, was turned into a bestseller in 2016 when it was first published by the Yazan publishing house.

“Testimony for Progeny”, which contains helpful advice for the younger generation in Iran on how to find their ways in life in the future, was published in 2019 and turned out to be his last book.

A street in Tehran’s District 6 was named after Mohammad-Ali Eslami Nodushan on November 7, 2020, and a bust of the Iranian scholar was set up at the intersection of that street with Vesal Shirazi St.

A boulevard in the central Iranian city of Yazd was also named after Eslami Nodushan at the same time. The City Council in his hometown Nodushan had previously named a square after him.