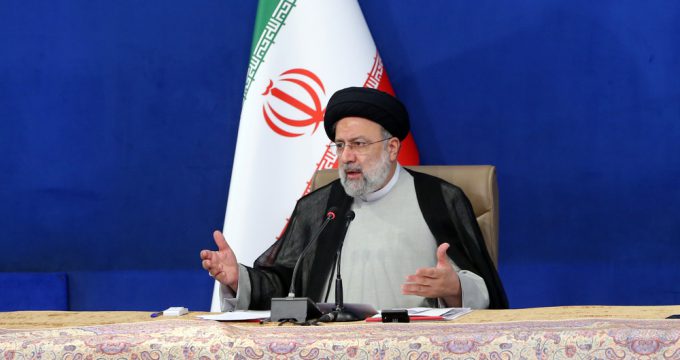 Iran’s President Ebrahim Raisi has strongly condemned Western countries for their double-standard approach to human rights violations by certain countries and inaction of so-called rights advocates in the face of such violations.

Raisi made the remarks on Monday in reaction to recent mass execution of 81 inmates in Saudi Arabia, who were put to death on alleged charges of terrorism, most of whom, however, were jailed on political grounds and for exercising their right to freedom of expression.

“We condemn application of double standards [to human rights violations] by Western countries and instrumental use of the concept of human rights as well as the silence and inaction of countries that claim to be advocates of these rights,” Iran’s chief executive said.

Raeisi added that such double-standard approach to human rights “reveals the hypocrisy of these [Western] countries that exploit the concept of human rights in the service of their own political goals and against independent governments.”

“International organizations, the free media and concerned [international] bodies must end their silence in this regard,” he said.

The state-run Saudi Press Agency said in an announcement on Saturday that Saudi Arabia had executed 81 prisoners in a single day over ‘terror-related offenses,’ in the largest mass execution carried out by the highly-conservative Arab kingdom in recent memory.

It added that the executed inmates included seven Yemenis and a Syrian, alleging that the suspects had been convicted of a variety of crimes, including killings and membership in militant groups.

In a related development on Monday, a senior advisor to Leader of the Islamic Revolution Ayatollah Seyyed Ali Khamenei reacted to Saudi Arabia’s mass executions, saying the silence of the so-called international rights organizations laid ground for such a massacre.

Ali Akbar Velayati, who is also the secretary general of World Assembly of Islamic Awakening, made the remarks in a statement in which he strongly condemned the Saudi Arabian government’s crime in mass execution of 81 political inmates.

“This overt massacre has shed more light on the true nature of Saudi statesmen and such a brazen crime will undoubtedly go down in history. Those who ordered and carried out this crime despite their apparent claim to advocating human rights, are condemned by freedom seekers of the world,” Velayati said.

In another part of the statement, Velayati reflected on the lull kept by international organizations and so-called rights bodies on the ongoing oppression of and crimes against Muslim people in the region.

“Despite all these crimes, which are being committed at the behest of the [global] arrogance and conspirators whose goal is to weaken the regional Muslim countries … the silence of international organizations and so-called rights bodies has provided the necessary ground for further aggression and more crimes, including the [recent] overt massacre in Saudi Arabia. This issue must be vociferously condemned,” he said.

Velayati concluded by noting that the unity of Muslims and the Islamic world is necessary to counter such inhumane acts.

Iran’s Foreign Ministry Spokesman Saeed Khatibzadeh on Sunday strongly condemned the mass execution of over 80 people by the Saudi government, describing it as an inhumane measure that contravenes the basic principles of human rights and international law.

“Execution and [the use of] unbridled violence are no solution to self-produced crises and the Saudi government cannot use such measures to cover up its political and judicial bedlam and suppress people,” he said.

The mass execution in Saudi Arabia has drawn a strong wave of condemnation from various Islamic and Saudi opposition groups, which say most of those executed were jailed only for exercising their right to free expression of opinion.

In a statement on Sunday, Lebanon’s Hezbollah resistance movement also condemned the latest mass execution in Saudi Arabia, saying it brings to the fore the true face of the Saudi regime, which practices the ugliest forms of sectarian discrimination.
By PRESS TV
US human rights violations, Yemen crisis March 14, 2022
Agreement to be reached as soon as US makes decision
Iran ‘Red Gold’ capital ready to host tourists