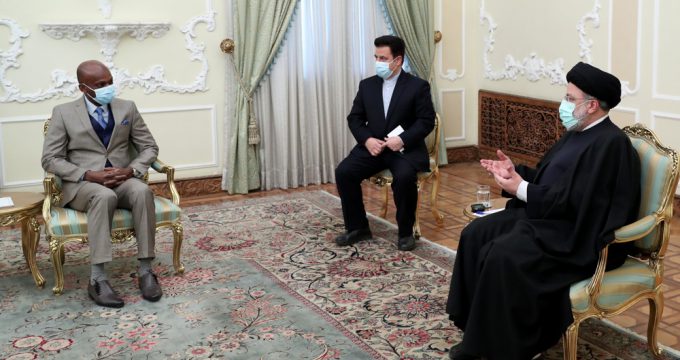 Raisi made the remarks in a meeting with Togo’s Foreign Minister Robert Dussey on Monday, saying that under the new Iranian administration, Iran will pursue development of economic, trade, and political relations with African countries with renewed strength.

He said Western powers have mainly sought to colonize and exploit African countries and they are currently pursuing their own wishes and interests in the continent in various forms.

He hailed “valuable” efforts by African people to “safeguard their independence” and added, “Their success depends on the emphasis on national and cultural identity and resistance against excessive demands.”

The Iranian president stated, “African countries have the necessary capacities for development and prosperity, and the Islamic Republic of Iran supports independence, progress and welfare of African people.”

The foreign minister of Togo, for his part, said his country is keen to establish joint broad and comprehensive relations with Iran to activate bilateral capabilities towards serving common interests.

In another meeting with Algerian’s new ambassador to Tehran Ali Arouj, the Iranian president said expansion of relations with the North African country is of great significance to the Islamic Republic.

Pointing to  Algerian people’s brilliant resistance against French colonialism, Raisi said, “Colonial powers have never given up their colonial spirit and are always pursuing their colonial goals with a new approach.”

“However, Algerian people have always maintained their spirit of resistance,” he added.

He expressed hope that the two countries would make their utmost efforts to improve bilateral political, economic, trade and cultural relations by relying on cordial bonds and previous agreements between the two nations.

For his part, the new Algerian ambassador, who submitted his credentials to the Iranian president, said the current level of economic relations between the two countries is not on a par with the excellent political ties and vowed to do his best to improve the level of his country’s economic and trade cooperation with Iran as an important economic partner.

He emphasized that Algeria would strongly continue its principled policies, particularly on support for the Palestinian cause, for which it has paid heavy costs.

Iran-Africa relations January 24, 2022
Iran not to accept any preconditions for Vienna talks
Russia slams freezing of Iran’s funds in South Korea as ‘piracy in action’