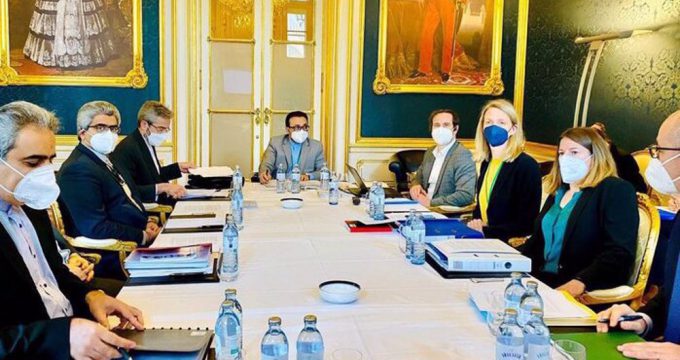 Senior representatives of Iran and the five parties to the 2015 agreement continue their diplomatic efforts in Vienna, Austria, to solve the issues hindering the revival of the deal, which has been in crisis due to the US’s unilateral exit.

According to IRNA, progress has been made in the talks and the lead negotiators of Iran and the five remaining signatories to the deal, officially known as the Joint Comprehensive Plan of Action (JCPOA), have settled some of the issues.

As the eighth round of the Vienna talks continue, Iran’s chief negotiator Ali Bagheri Kani on Wednesday held bilateral and multilateral meetings with delegates of the P4+1 group of countries.

In separate meetings, the chief negotiators from Iran and the three European signatories (E3) to the JCPOA — Britain, France and Germany — as well Russia and China discussed possible ways to secure the removal of all sanctions imposed by the United States on Tehran after Washington’s unilateral withdrawal from the nuclear deal in 2018.

Bagheri Kani also met with Enrique Mora, the European Union’s deputy foreign policy chief and head of the JCPOA Joint Commission, who has just visited Russia and held talks with the country’s officials on various issues, including the Vienna negotiations.

Meanwhile, experts from Iran, the P4+1 group of countries and the EU also held discussions on various issues.

Iran and the remaining parties to the JCPOA have been holding talks in the Austrian capital since April last year. The sides resumed diplomatic consultations on Monday after a two-day pause so that the diplomats could return to their respective capitals for consultations.

Under former US president Donald Trump, Washington unilaterally withdrew from the JCPOA and imposed sanctions primarily targeting the Iranian economy.

Iran argues that a lack of initiative among the Western parties to the deal is the main factor slowing down the talks.

Tehran has criticized the West, particularly the US, for failing to present any innovative proposals to help the talks move forward.

Meanwhile, Secretary of Iran’s Supreme National Security Council Ali Shamkhani said the country’s oil sales and revenues have reached at an “appropriate and irreversible” level despite the harsh sanctions imposed on the country’s energy sanctions.

“The Iran’s oil trading and its financial affairs, has reached appropriate and irreversible conditions,” the top Iranian security official said in a tweet.

He used the hashtag “ActiveResistance,” referring to the Iranian nation’s cause of nullifying Western pressure through promoting domestic capabilities.

“It is not possible to promise to lift a sanction that has become ineffective, in order to score a point,” he tweeted.