Iran Mission to UN reacts to US newspaper’s hostile article

In reaction to an article published by an American newspaper, Iran Permanent Mission to UN said that encouraging leaders to initiate war, amid serious diplomatic talks, are in violation of the principles of International Law.

“Encouraging & advising leaders to opt for war, especially when a serious diplomatic process is underway- is ignorant, hostile, & in contravention of the principles of International Law”, Permanent Mission of the Islamic Republic of Iran to United Nations wrote in a tweet on Saturday.

“Those who design & implement such reckless plans will bear responsibilities for consequences”, it added.

The Permanent Mission of the Islamic Republic of Iran to the United Nations in New York made the remarks in reaction to an anti-Iran and belligerent article published by the Wall Street Journal. 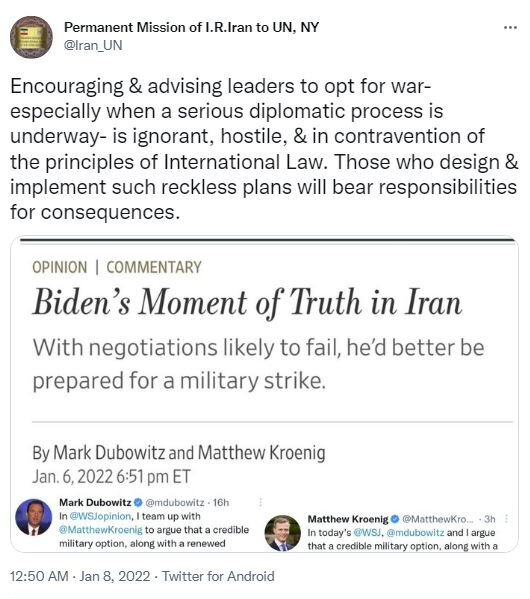 Wall Street Journal claimed in the article that in the possible event of failure of the ongoing talks in Vienna, it would be better for US President Joe Biden to prepare for a military strike.

The new round of sanctions removal talks between Iran and JCPOA member states resumed on January 3 in Vienna, after adding some new Iranian demands to a working text.

Earlier, Iranian Foreign Minister Hossein Amir-Abdollahian stressed in a tweet that it is now time for the Westerners to show their good faith, seriousness to reach a good agreement in the ongoing talks in Vienna.