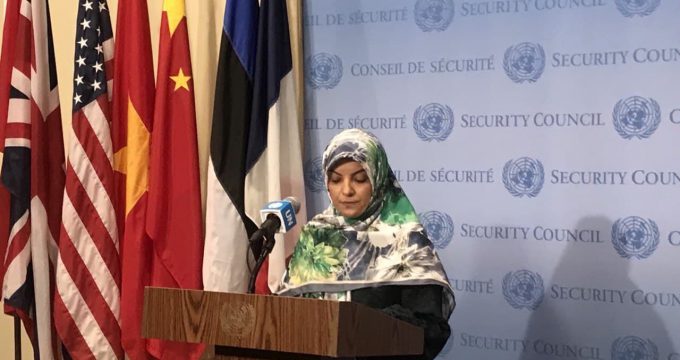 Iran’s deputy ambassador to the United Nations urged cooperation among coastal countries in the region to protect the ecosystems of the Persian Gulf and Oman Sea.

Addressing a UN General Assembly meeting on “Oceans and the law of the sea” on Tuesday, Ambassador and Deputy Permanent Representative of Iran to the United Nations Zahra Ershadi warned against the increasing damage and destruction of essential and economically important coastal ecosystems, such as mangrove forests, coral reefs and the livelihood of fisheries in the Persian Gulf and Oman sea.

Here is the full text of her speech, released by the Iranian government’s website:

Allow me at the outset to extend my appreciation to the Secretary-General for his reports on the Oceans and the Law of the Sea as well as the coordinators of the informal consultations on both draft resolutions A/75/L.18 and A/75/L.20.

We would also like to thank the Division for Ocean Affairs and the Law of the Sea for their efforts and invaluable support throughout this exercise.

With that being said, I would also like to reiterate my delegations positions on a number of issues related to this Agenda item as follows:

While recalling the importance of the United Nations Convention on the Law of the Sea of 1982 as a general legal framework for activities in the oceans and seas along with acknowledging the status of the Islamic Republic of Iran as a signatory state to the UNCLOS, we are of the view that this Convention is not the only legal framework governing activities carried out in the oceans and seas.

Therefore, we would expect any negotiations on related resolutions to oceans and seas consider the position of non-member parties to that Convention and conduct themselves in an appropriate manner that encompasses the legitimate concerns of those countries.

Such an inclusive vision could lead to constructive engagement among a wider number of countries in supporting those resolutions.

Nevertheless, any constructive engagement by my Delegation during the negotiations and joining of the consensus should not be construed as acceptance of this Convention as a legally binding instrument by my Government.

Iran’s activities in the marine environment strictly adhere to those international instruments that it has expressly accepted.

However, among others, a strong belief in protecting the sea and its resources as well as ensuring the safety and security of maritime activities have inspired us to cooperate with other countries in a constructive spirit on these parts of the planet.

As a coastal state of the Persian Gulf and the Sea of Oman, the I.R. of Iran is committed to realizing the targets of Sustainable Development Goal 14 in line with the agenda for sustainable development.

In order to achieve those targets as well as Decade of Ocean Science for Sustainable Development, 2021 t0 2030, we stress that much greater efforts should be undertaken by states and all other stake holders, including through international cooperation and coordination as well as by providing not only capacity building but also transfer of marine technology and know-how to the developing countries.

The I.R. of Iran highly values the efforts that have been made on sustainable fisheries management which have an outstanding role in supporting the economic activities of some developing countries, conservation of maritime resources, healthy maritime ecosystems and ensuring food security for all.

With due attention to the decrease of marine resources in recent years planning for the responsible fisheries management, the use of selective fishing method and combating illegal unreported and unregulated fishing should be on the agenda of all countries, regional fisheries management organizations and relevant international institutions.

In this regard, it is necessary for countries to take urgent action in the form of national programs and international cooperation to raise the knowledge and awareness of fishermen and exploiters of marine resources by building capacities.

Sea level rise, loss of biodiversity and depletion of the population of fauna and flora are other issues that we face in the region as well.

Taking into consideration the increasing damage and destruction of essential and economically important coastal ecosystems, such as mangrove forests, coral reefs and the livelihood of fisheries in the Persian Gulf and Oman sea, we strongly recommend taking the necessary action to protect such ecosystems through cooperation among coastal countries in the region.

In the area of marine life and its maintenance, the irresponsible construction of artificial islands in the Persian Gulf would unequivocally damage the habitats of rare marine species and would endanger the natural life of its unique maritime resources.

Deployment and the heavy presence of military fleets from countries outside of the region in the Persian Gulf have exacerbated not only the safety and security of coastal states as well as the smooth navigation in this body of water, but also its maritime pollution and marine resource depletion.

We urge all relevant states to cooperate in order to protect the environment of this shared body of water and refrain from unilateral acts that might endanger its marine environment.

Sea level rise is one of the most well-known consequences of global warming and climate change that my country as a coastal state is facing.

With regard to tackling it developed countries must meet their commitments under the UNFCCC and Paris Agreement including to provide financial resources, capacity building and transferring technology.

Taking into consideration that developed countries should take a lead in climate actions according to their historical responsibility in GHGs emission. Ambition in climate action and providing means of implementation for developing countries could pave the way to achieve sustainable development for all.

Acknowledging the importance of conservation, sustainable use and equitable sharing of the maritime biological resources in areas beyond national jurisdiction, the I. R. of Iran supports the development of an effective, comprehensive and legally binding instrument on the conservation and sustainable use of marine biological diversity of areas beyond national jurisdiction, consistent with the international law of the sea.

Considering biodiversity in areas beyond national jurisdiction as the common heritage of humankind, my delegation is looking forward to participating in the fourth session of the BBNJ Intergovernmental Conference in 2022.

The I. R. of Iran reiterates its commitment to rule-based maritime order for securing maritime rights and interests for all as well as ensuring that maritime activities are undertaken smoothly, including based on the international law of the sea.

Based on that commitment and sincere conviction wherein the protraction of conflicts and ever-escalating tensions among littoral States of Persian Gulf are prone to not only further destabilize the region but also severely endanger the development and prosperity of the peoples of the region, the Islamic Republic of Iran proposed an initiative based on dialogue, cooperation and mutual respect at the seventy-fourth session of the General Assembly.

The I.R. of Iran remains steadfast in its belief that regional cooperation based on the aforementioned proposal would ensure safety, security and international order at sea, especially in the Persian Gulf and the Sea of Oman.

Our contribution to combat piracy at sea in the region and beyond, in cooperation with other countries, that has been reflected by the Secretary-General in his relevant consecutives reports and commended by the Security Council in a number of resolutions, emanates from the same sentiment and understanding.

Finally, Mr. President, as we expressed in our statement last year, the outbreak of the COVID-19 pandemic, in addition to unilateral coercive measures that were preexisting due to the US maximum pressure policy on my Country and the Iranian people, has exacerbated the daily life of ordinary Iranian people.

It has heavily affected the provision of the basic needs of people, including food, medicine, medical equipment and commodity supply chains due to the disruption of the freedom of navigation of the I.R. of Irans Shipping Lines as a result of the vicious sanctions.

In addition to the previous acts that have been outlawed, stolen Iranian oil and its drivers at sea have been a new development since last year.

We strongly warn regarding the continuation of this dangerous policy that exacerbates an already highly intense situation due to such arrogant unilateral policies.

We urge the international community to condemn these unlawful acts that threaten free trade at sea as well as freedom of seas and disregard the inhuman sanctions.

I thank you Mr. President”