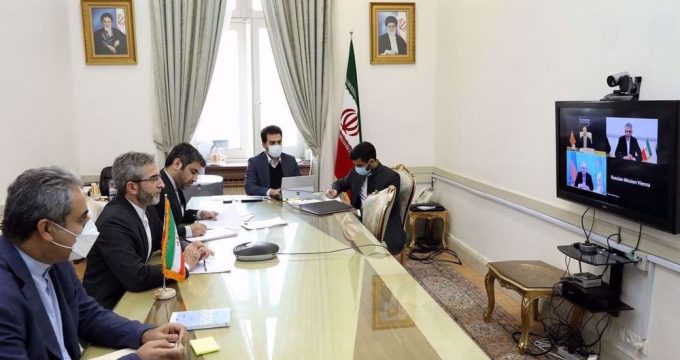 Iran’s top negotiator and Deputy Foreign Minister for Political Affairs said that the effective removal of US sanctions is the main priority of Vienna talks.

Iran’s top negotiator in talks aimed at removing US sanctions imposed on Tehran said that ensuring effective removal of sanctions is a necessity and the main priority of the upcoming talks in the Austrian capital.

Ali Bagheri Kani made the remarks in a video conference with deputy foreign ministers of Russia and China, Sergei Ryabkov and Ma Zhaoxu, on Monday.

During his Monday talks, Bagheri Kani emphasized that the removal of all sanctions, which have been imposed on Tehran in violation of the 2015 nuclear agreement, and end to measures, which are inconsistent with UN Security Council Resolution 2231, in a verifiable way that would help Iran enjoy the economic and trade benefits of the landmark deal are “necessary conditions” for the Vienna talks to succeed.

He said the three countries of Iran, China, and Russia see eye to eye on the need to promote multilateralism and counter unilateralism. “The oppressive US sanctions against Iran are the price of [the country’s] fight against unilateralism,” he underlined.