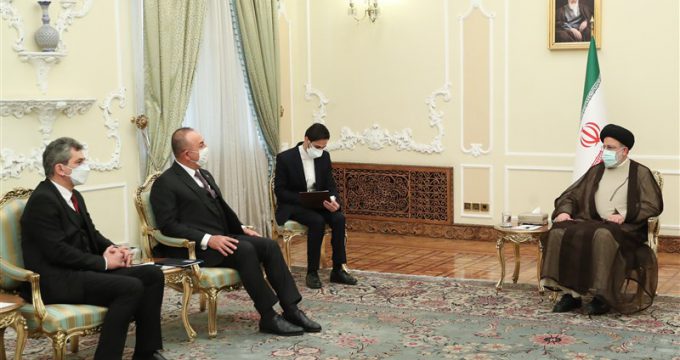 Iranian President Ebrahim Raisi called for the expansion of relations with Turkey with the finalization of a roadmap to mutual cooperation, saying the ties between the two neighbors could affect the global equations considering their position.

In a meeting with Turkish Foreign Minister Mevlut Cavusoglu, held in Tehran on Monday, Raisi said closer cooperation between Iran and Turkey, the economic and trade ties in particular, would serve the interests of the two Muslim nations.

Calling for the finalization of a roadmap to mutual cooperation, the president said close interaction between the two neighbors would benefit regional peace and stability.

Iran maintains that regional countries are capable of resolving their problems without foreign interference, he added.

“The presence of outsiders has resulted in nothing but insecurity and tension among regional nations and governments, as twenty years of American presence in Afghanistan brought about nothing but homicide, bloodshed and destruction, and it became clear that the problems of Afghanistan could be resolved in the hands of its people and with the help of neighbors,” the Iranian president said.