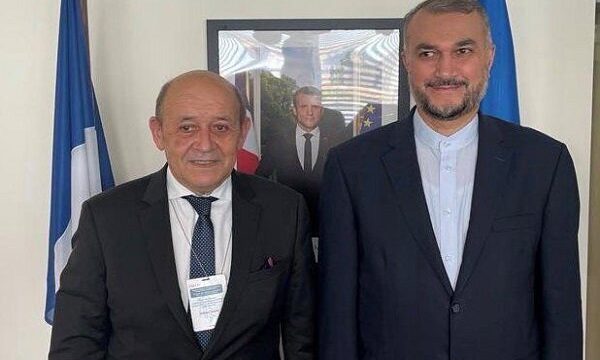 Iran to develop its defense power regardless of US sanctions: Amir-Abdollahian told French counterpart

Iranian Foreign Minister called Iran’s defense program a sovereign right of any country, adding that Iran will continue to improve its defense power with all might, regardless of US sanctions.

Amir-Abdollahian, also, thanked him for asking about his health condition.

Stating that the Iranian government adopts a pragmatic and result-oriented approach both in bilateral relations and in nuclear talks, Amir-Abdollahian expressed hope that the Tehran-Paris consultations would lead to the practical advancement of cooperation between the countries.

He also expressed Iran’s readiness to develop bilateral relations with France in various fields based on mutual respect and common interests.

Elsewhere in his remarks, referring to the silence of the European troika towards US extravagance, he held the US responsible for the current situation of the JCPOA.

Iran wants to reach a good agreement, but this requires some conditions, including the other JCPOA members must fulfill their commitments and sanctions must be lifted effectively, he added.

Iranian Foreign Minister called Iran’s defense program a sovereign right of any country, adding that regardless of US unconstructive behaviour on imposing sanctions, Iran will continue to improve its defense power with all might.

The French Foreign Minister also said that Paris supports the return of all parties to the JCPOA, adding that his country will make any efforts to do so.

He also expressed hope that the forthcoming talks in Vienna will achieve rapid progress.