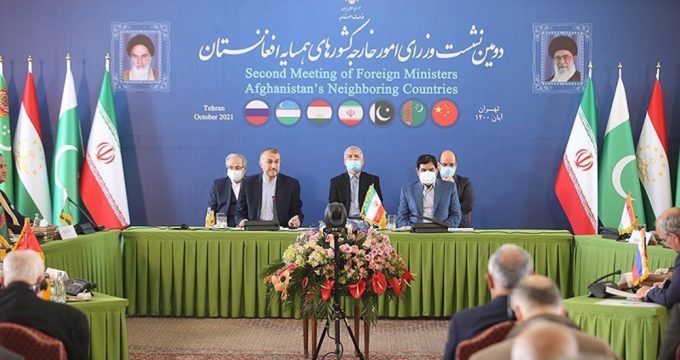 In a joint statement of the Tehran meeting on Afghanistan, the foreign ministers of Afghanistan’s neighboring countries plus Russia expressed concern over political, economic, social and humanitarian situations in the country.

At the end of the meeting, the foreign ministers issued a joint statement, stressing that the only solution to Afghanistan’s problems is the formation of an inclusive political structure with the participation of all ethnic groups.

Following is the full text of the statement:

Joint Ministerial Statement of Meeting of

The meeting was inaugurated by His Excellency Mohammad Mokhber, the Vice-president of the Islamic Republic of Iran who gave a comprehensive speech on the Afghanistan situation. The video message by His Excellency Mr. Antonio Guterres the Secretary-General of the United Nations was then screened in the opening.

Next, the honored foreign ministers gave their speeches on Afghanistan concerned matters. The meeting was then closed by approving the ministerial joint statement.

Following the talks and discussions in an atmosphere of confidence, multilateral understanding and constructive approach,

− Noting that the situation in Afghanistan has changed fundamentally and stressing support for the national sovereignty, political independence, unity and territorial integrity of Afghanistan, and non-interference in its internal affairs;

− Recalling the universally accepted principles of international law in particular the Afghan people’s right to decide on their own future independently, and respecting the aspiration of the Afghan people for realizing durable peace, hope to see an Afghanistan enjoying stability, development, prosperity and harmonious relations with its neighboring countries;

− Agreeing that countries primarily responsible for the difficulties in Afghanistan should earnestly deliver on their commitment, and provide Afghanistan with urgently needed economic, livelihood and humanitarian assistance to help realize a stable transition of the situation in Afghanistan;

− Noting that an inclusive and broad-based political structure with the participation of all ethno-political groups is the only solution to Afghanistan issues;

− Expressing the strong support of neighboring countries of Afghanistan to achieve peace, stability and national reconciliation in the country and encouraging all parties, including the Taliban to continue political dialogue and consultations for the solution of the outstanding issues, and future development of the nation;

− Emphasizing that international and regional organizations in particular the United Nations agencies and relevant members of the UN Security Council should abide by their responsibility for the political settlement of Afghanistan issues, rendering support to Afghans to develop the socio-economic infrastructure and providing economic and humanitarian assistance;

− Taking with great concern into consideration the deteriorating economic situation in Afghanistan and urging the international community to provide humanitarian assistance on an urgent basis;

1. Support a durable and realistic settlement of differences through dialogue and negotiation among relevant parties for achieving national reconciliation, lasting political solution and formation of an inclusive government;

2. Call on the relevant Afghan parties to implement modest and prudent internal and external policies, return to the normal order of the society as soon as possible, realize the effective operation of government agencies, provide basic public services to people, take actions to improve people’s livelihood and protect the fundamental rights of ethnic groups, women and children in Afghanistan;

3. Take note of the assurances and commitments of relevant responsible Afghan parties to the international community that the territory of Afghanistan will not pose any threats to the neighboring countries and will not be used by criminal, terrorist and separatist groups, and cut ties with all kinds of terrorist groups, strike and eliminate them in a decisive manner;

4. Call on the Afghan relevant parties to abide by their all undeniable responsibilities, take a friendly approach toward neighboring countries and respect recognized universally accepted principles of international law and fundamental human rights and protect the safety and legitimate rights of foreign nationals and institutions in Afghanistan;

5. Encourage the relevant Afghan parties to confront various threats and challenges including terrorism, drug smuggling and human trafficking, crackdown on organized crime and other criminal acts originating from Afghanistan and taking into consideration the terrorism threats and counter-terrorism effectiveness in Afghanistan, discuss through bilateral or multilateral channels the possibility of restarting counter-terrorism cooperation with Afghanistan in due course;

6. Call on the relevant parties of Afghanistan and the international community to address the root causes of refugees and forced displacement in Afghanistan to avoid any destabilizing activity that would deteriorate the situation and cooperate to bring a permanent solution for the protracted situation of Afghan refugees;

9. Call on the international community to take concrete actions to provide Afghanistan with help against COVID-19, and curb the spreading of the virus;

10. Start the function of the mechanism of regular meetings of Special Envoys (representatives) for Afghanistan affairs as well as regular meetings of the representatives of Embassies in Kabul at an early date (as mentioned in the first round of foreign minister’s meeting joint statement) to jointly promote and hold consultations on details of relevant cooperation regularly for more concrete achievements;

11. Reiterate call on the international community to remain positively engaged with Afghanistan and develop long term roadmap to advance the agenda of political engagement, economic integration and regional connectivity;

The Foreign Ministers appreciated the Islamic Republic of Iran for hosting the second round of the meeting and agreed to hold the third round in 2022 in China.