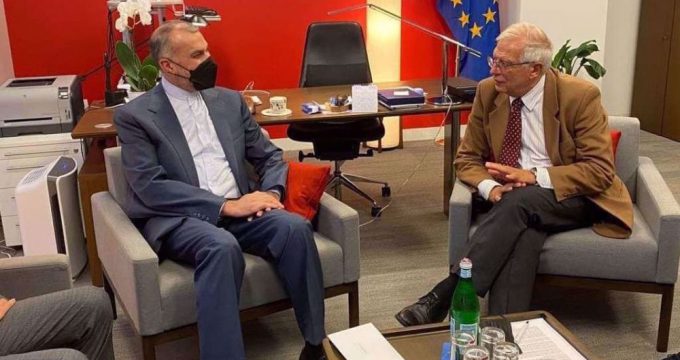 ran’s foreign minister has announced that the new administration will resume talks in Vienna aimed at resuscitating a US-scrapped nuclear agreement between Iran and the remaining parties to the deal.

“As mentioned earlier, we are seriously reviewing the negotiations’ records and the new administration will resume the talks,” Hossein Amir-Abdollahian said during a meeting with EU foreign policy chief Josep Borrell on Tuesday on the sidelines of the 76th session of the UN General Assembly.

Amir-Abdollahian said the administration of President Ebrahim Raeisi is pragmatic within the framework of its principles and would seek a practical outcome through the Vienna format.

“Our criterion is the action of the other parties and not their words,” he stressed.

According to the foreign minister, the Raeisi administration neither accepts the United States’ unconstructive behavior nor will it forestall Iran’s progress based on Washington’s habitually empty promises.

Iran and six world powers—the US, Russia, China, France, Britain and Germany—reached a nuclear agreement called the JCPOA in 2015. Three years later, the JCPOA was unilaterally abandoned by Washington under former president Donald Trump, in spite of Tehran’s hitherto strict compliance with the multilateral accord.

The parties to the JCPOA began high-profile talks in Vienna earlier this year after the US, under Joe Biden, voiced willingness to rejoin the deal and remove the draconian sanctions his predecessor slapped on the Islamic Republic. However, the talks have hit a pause due to Iran’s democratic transition after Ebrahim Raeisi’s victory in the June 18 presidential election.