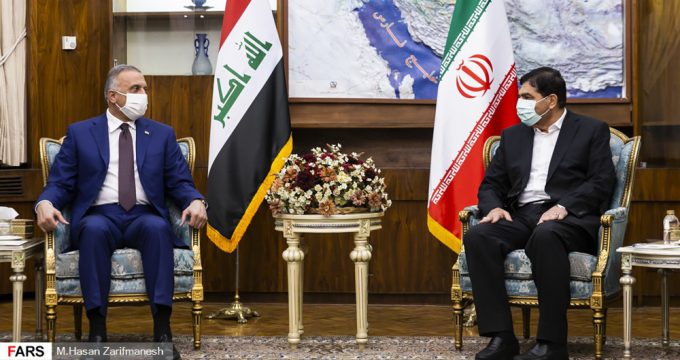 Iran’s first vice president says relations between Iran and Iraq play an essential role in boosting security in the region and should be expanded at all levels.

Mohammad Mokhber made the remarks in a Sunday meeting with the visiting Iraqi Prime Minister Mustafa al-Kadhimi in Tehran, during which the two sides discussed matters of mutual interest and ways of expanding bilateral relations.

Referring to age-old cultural, political and economic exchanges between Iran and Iraq, Mokhber said, “Relations between the two countries play an essential role in promoting stability and security in the region and bilateral cooperation must expand at all levels.”

Kadhimi, heading a high-ranking political and economic delegation, landed in the Iranian capital on Sunday morning to meet with top Iranian officials, including President Ebrahim Raeisi.

Kadhimi’s visit to Tehran is his first since Raeisi was sworn in as Iran’s new president.

During the meeting, Iran’s first vice president also thanked the Iraqi government for hosting a conference in Baghdad to ease regional tensions and discover the potential for regional cooperation.