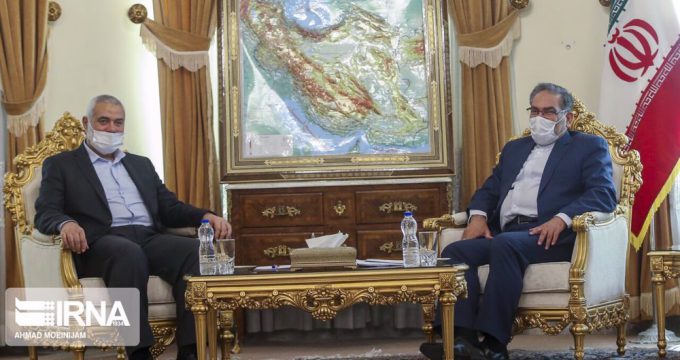 Secretary of Iran’s Supreme National Security Council Ali Shamkhani says the range of missiles and the tactical capabilities of the Palestinian Hamas resistance movement and Islamic Jihad to pass through various radar systems and the Iron Dome have invalidated the idea of ​​the invincibility of the Israeli regime.

Shamkhani made the remarks in a meeting with Head of the political bureau of Hamas Ismail Haniyeh and Ziyad al-Nakhalah, leader of the Islamic Jihad – another Palestinian resistance group based in the Gaza Strip – in Tehran on Saturday.

He said the collapse of the fabricated Israeli regime is possible in the near future if all resistance groups unite under the cause of Palestine and Holy al-Quds.

He felicitated the resistance leaders on the brilliant achievements made in “Operation al-Quds Sword” — the Palestinian resistance groups’ 11-day retaliatory rocket and missile launches in response to Israel’s brutal bombing campaign of Gaza in May – and hailed the pivotal role of the Islamic Jihad and Hamas in fighting the Israeli regime and inflicting a humiliating defeat on the occupiers.

Tel Aviv launched a brutal bombing campaign against the besieged Gaza Strip on May 10, following Palestinian retaliation against violent raids on worshipers at al-Aqsa Mosque and the regime’s plans to force a number of Palestinian families out of their homes at the Sheikh Jarrah neighborhood of East al-Quds.

According to Gaza’s Health Ministry, 260 Palestinians were killed in the Israeli offensive, including 66 children and 40 women. At least 1,948 others were also wounded.

In response, Palestinian resistance movements, chief among them Hamas, launched Operation al-Quds Sword and fired more than 4,000 rockets and missiles into the occupied territories, killing 12 Israelis.