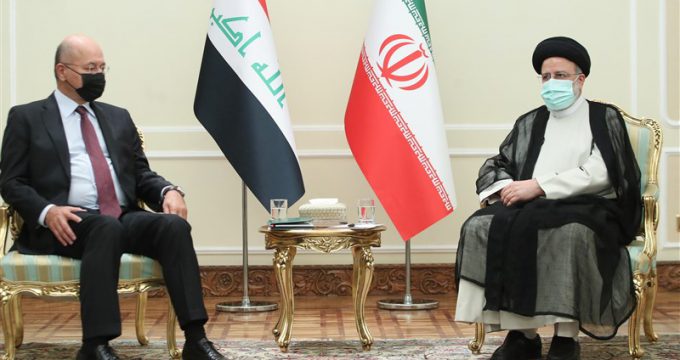 The presidents of Iran and Iraq at a meeting in Tehran discussed ways to promote cooperation between the two neighbors.

In the meeting with his Iraqi counterpart Barham Salih, held in Tehran on Thursday, Iran’s new President Ebrahim Raeisi affirmed that the Islamic Republic favors a strong and mighty Iraq.

He also expressed hope that the parliamentary elections in Iraq, slated for October, would pave the way for the fulfillment of demands of the Iraqi nation.

Every step leading to Iraq’s strength and preventing foreign interference would contribute to the Arab country’s progress, Raeisi stated, pointing to the sacrifices made by Iran in order to preserve Iraq’s territorial integrity, security and stability.

For his part, the Iraqi president highlighted the deep and cordial relations between the two nations that were not harmed even under a long war imposed by former dictator Saddam Hussein, saying there are numerous capacities for the expansion of ties between the two neighbors.

Stressing the need for the redefinition of security arrangements in the region, Salih said steering the regional developments towards inclusive stability and security would be impossible without Iran and a powerful Iraq.

A mighty government in Iraq with sovereignty over the entire country could play a very constructive role in the regional security arrangements, the visiting president stated.

Salih finally expressed gratitude to Iran for its efforts to preserve Iraq’s territorial integrity in the fight against terrorism, saying the fact that Iran has been a friend of Iraq in the hard days will shape the future of their relations.

The Iraqi president has joined dozens of other foreign officials in Tehran to attend the swearing-in ceremony of Ebrahim Raeisi as the eighth president of Iran.