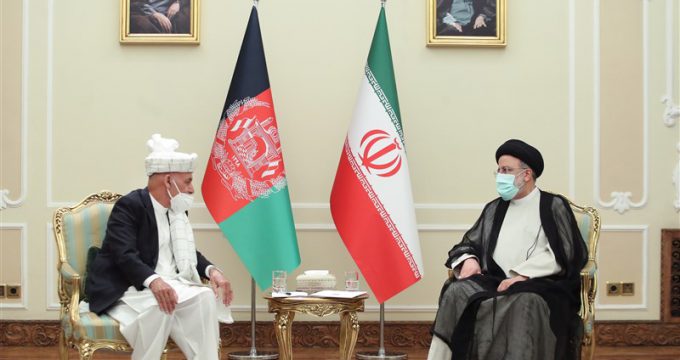 The new president of Iran emphasized the necessity of cooperation with the legitimate government of Afghanistan in the efforts to ensure peace and stability in the neighboring state.

President Ebrahim Raeisi held a meeting with his Afghan counterpart Ashraf Ghani in Tehran on Thursday.

Stressing the importance of the Iranian administration’s cooperation with the legitimate government of Kabul in ensuring peace and stability in Afghanistan, Raeisi said, “The security of Afghanistan must be provided by the Afghans themselves, and Iran is prepared for collaboration and cooperation in this regard for the establishment of sustainable and fair peace and ridding the Afghan people of pains and miseries.”

The new president also noted that Iran is ready to employ its capacities to create peace in Afghanistan and prevent bloodshed in the neighboring country.

Slamming the plots hatched by the outsiders as the root cause of insecurity and tensions in Afghanistan, Raeisi said despite the diminishing presence of American forces in Afghanistan, the US will continue its provocative and seditious activities in various methods, because the US’ interests and existence are based upon creation of insecurity.

Ghani, for his part, said Afghanistan is willing to boost its political and economic ties with Iran is all areas.

Highlighting Iran’s key and influential role in creating regional security and stability, the Afghan president called for the employment of Iran’s capacities for joint action and cooperation in the process of ensuring sustainable security in Afghanistan.

Ghani is in Tehran to take part in the new Iranian president’s inauguration.