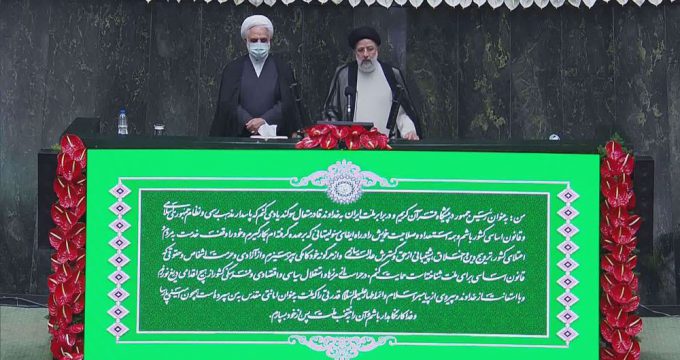 After having his mandate endorsed by Leader of the Islamic Revolution Ayatollah Seyyed Ali Khamenei, Ebrahim Raeisi has taken the oath of office to be officially inaugurated as the eighth president of the Islamic Republic of Iran.

The swearing-in ceremony was held at the Iranian parliament on Thursday afternoon, attended by high-ranking Iranian civil and military officials as well as a great number of foreign dignitaries from more than 70 countries.

The ceremony started with a speech by Iran’s Parliament Speaker Mohammad Baqer Qalibaf followed by an address delivered by head of Iran’s Judiciary Gholamhossein Mohseni Ejei.

After speeches were delivered by heads of the Judiciary and Legislature, Ebrahim Raeisi took to the podium to be sworn in as Iran’s eighth president following the Islamic Revolution of 1979.

During the oath-taking ceremony, Raeisi read out the text of the oath, which says, “I, as the President, upon the Holy Qur’an and in the presence of the Iranian nation, do hereby swear in the name of Almighty God to safeguard the official Faith, the system of the Islamic republic and the Constitution of the country; to use all my talents and abilities in the discharge of responsibilities undertaken by me; to devote myself to the service of the people, glory of the country, promotion of religion and morality, support of right and propagation of justice; to refrain from being autocratic; to protect the freedom and dignity of individuals and the rights of the nation recognized by the Constitution; to spare no efforts in safeguarding the frontiers and the political, economic and cultural freedoms of the country; to guard the power entrusted to me by the nation as a sacred trust like an honest and faithful trustee, by seeking help from God and following the example of the Prophet of Islam and the sacred Imams, peace be upon them, and to entrust it to the one elected by the nation after me.”