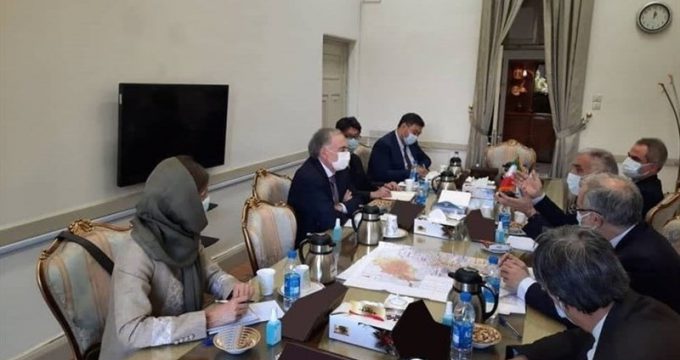 Diplomats from Iran and the UN called for efforts to reduce violence and civilian killings in Afghanistan.

Special Representative of the United Nations Secretary-General in Afghanistan and Head of the UN Assistance Mission in Afghanistan (UNAMA) Jean Arnault has visited Iran with a delegation for consultations about various Afghan issues.

The UN diplomat on Monday met with the Iranian foreign minister’s special envoy for Afghanistan, Mohammad Ebrahim Taherian, in Tehran.

The two sides discussed the latest developments in Afghanistan, including the process of peace negotiations and the security conditions.

Taherian emphasized in the meeting that Iran regards peace and security in Afghanistan as its own peace and security, reaffirming Tehran’s support for Afghan peace with the participation and under the auspices of the Afghan people.

He also voiced Iran’s readiness for cooperation in facilitating and advancing the intra-Afghan negotiations, stressing the need to safeguard the achievements of people of Afghanistan gained over the past two decades.

The two sides also voiced concern about the escalation of violence in Afghanistan in recent months, calling for plans to reduce violence and prevent the civilian deaths in that country.

In an address to the 9th annual ministerial meeting of the Heart of Asia-Istanbul initiative in Tajikistan in March, Iranian Foreign Minister Mohammad Javad Zarif invited the UN to help facilitate the intra-Afghan negotiations, which he described as a requisite for peace and stability in Afghanistan.

He also emphasized that any peace agreement in Afghanistan should guarantee the right of self-determination for the Afghan people.