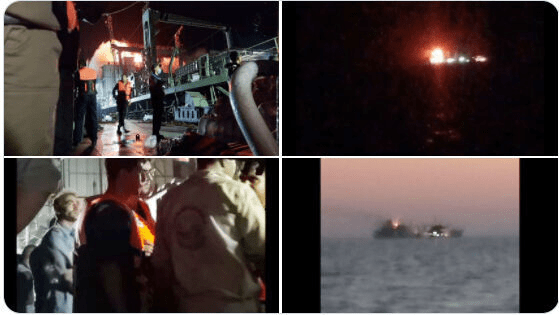 Iranian naval vessel sinks in Gulf of Oman after fire

The Iranian Navy’s ‘Khark’ training and logistical ship has sunk in the Gulf of Oman off the coasts of the southern port of Jask after a fire, the Navy announced.

The public relations department of the Navy’s second maritime zone in Jask said in a statement that all crew on board the vessel have been disembarked and transferred to the coast after the fire broke out in Khark.

The military vessel was being deployed to international waters for a training naval operation when one of its systems caught fire near the port of Jask.

Twenty hours of efforts by military and civilian organizations to extinguish the fire were futile as the fire spread to different parts of the naval ship, which finally sank, the statement added.

Khark had been in service for more than four decades and had taken part in many training operations.