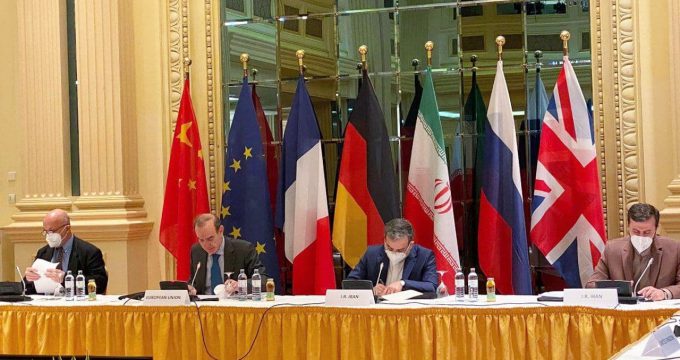 US reports ‘some progress,’ but distance to go at Iran talks

A US official announced progress in clarifying the steps the US and Iran would need to comply with the nuclear pact, but there are still disagreements to overcome.

The United States today reported ‘some progress’ in clarifying the steps the US and Iran would need to take to return to full compliance with the 2015 Iran nuclear deal after six days of international talks in Vienna that wrapped up on Tuesday. But there are still disagreements to overcome, US officials cautioned.

“We made some progress,” a senior State Department official, speaking not for attribution, told journalists on a background call tonight.

“But clarification does not mean consensus,” the official continued. “There are still disagreements, … some important ones.”

The talks were businesslike and productive, he said. “But there are still many differences that would need to be overcome.”

“We are not near the conclusion,” he added.

“On sequencing, there was not much of a discussion because we are still in the process of describing and detailing the steps both sides need to take,” the senior State Department official said.

He said he anticipated a “multi-round negotiation,” the next round of which is currently set to resume again in Vienna next week.

The remarks made by US State Department official is similar to those recently uttered by White House National Security Advisor Jake Sullivan in an interview with CNN.

We have made some progress; there is still a distance to travel, said Sullivan.

The 5th round of nuclear talks between Iran and P4+1 on the way of full and effective implementation of JCPOA was held off in Grand Hotel in Vienna on Tuesday afternoon with the participation of the representatives from Iran and the remaining signatories to the Iran nuclear deal.

Referring to the 5th round of the JPCOA Joint Commission Meeting in Vienna, the Iranian Deputy Foreign Minister for Political Affairs Seyed Abbass Araghchi said, “All sides are still serious and they have attended the meeting seriously. Many delegations hope that this round can be the last round of negotiations and we can reach a conclusion.”

Stating that it can not be said surely that this will be the last round of talks, Araghchi noted that negotiations will continue until the country’s interests are served.