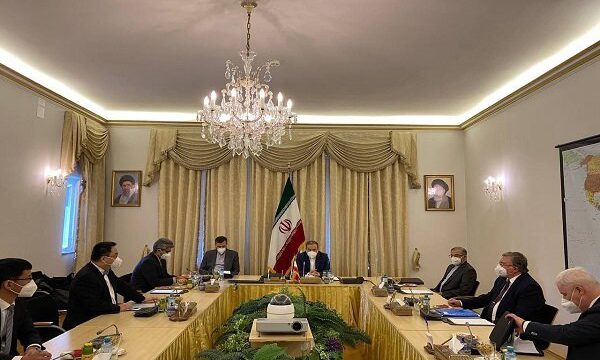 Iran, China, Russia called for the immediate lifting of US sanctions as a necessary condition for the country’s return to the JCPOA.

On the eve of the resumption of the meetings of the Joint Commission of the JCPOA in Vienna, a tripartite coordination meeting was held between the heads of Iranian, Chinese and Russian delegations.

During the meeting, the parties reviewed the latest status of talks on the possible return of the United States to the JCPOA and the lifting of US sanctions against Iran.

They also called for the immediate lifting of US sanctions as a necessary condition for the country’s return to the JCPOA.

The heads of delegations of the Islamic Republic of Iran, Russia and China stressed the need for continued consultations and serious coordination on a regular and continuous basis between the three countries in these negotiations.

The Iranian negotiating team headed by the Iranian Deputy Foreign Minister for the Political Affairs Seyyed Abbas Araghchi left Tehran for Vienna on Monday to attend the meeting of the Joint Commission of the JCPOA which is scheduled to be held at 15:00 local time in Vienna with the presence of the delegations of Iran and the P4+1 (Germany, France, Britain, Russia, and China) and the representative of the European Union.