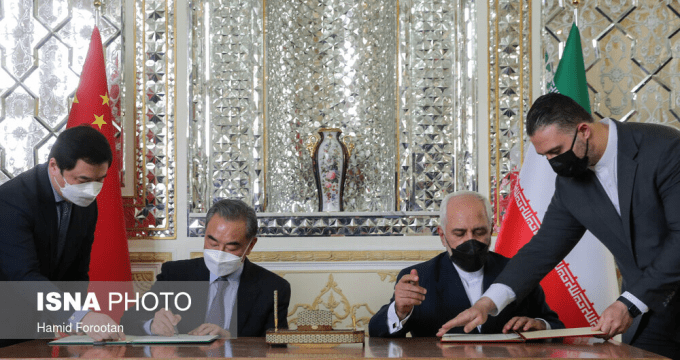 March 31, The Iran Project – Top diplomats from Iran and China have signed a 25-year comprehensive strategic partnership agreement, which is a roadmap for cooperation between the two US-sanctioned countries, in a ceremony on Saturday, March 27, 2021. The pact which focuses on the capacities and perspectives in various areas was considered by many as a strategic tilt that formed a new alliance.

Chinese Foreign Minister Wang Yi started his two-day Iran visit on Friday, the third leg of his six-state Middle East tour, following intensive diplomatic meetings with US senior diplomats in Alaska and with his Russian counterpart in South China’s Guilin within a week.

Ahead of the signing ceremony, the Chinese diplomat held talks with President Hassan Rouhani and Ali Larijani, the Iranian Leader’s point man on China.

During a meeting with Larijani, Wang said that China’s relations with Iran will be “permanent and strategic” and will not be affected by the current situation. Iran decides independently on its relations with other countries and is not like some countries that change their position with one phone call.

Also, Iranian Foreign Ministry spokesman Saeed Khatibzadeh described the $400 billion deal as a “deep, multilayered and fully-fledged” pact to deepen trade, economic, and transport cooperation that would be “very effective in deepening” relations with China.

Overview of of the Agreement

In 2016, the Sino-Iranian Comprehensive Strategic Partnership was agreed in Tehran by President Hassan Rouhani and his visiting Chinese counterpart Xi Jinping, a champion of the Belt and Road initiative, a multi-trillion-dollar infrastructure scheme intended to stretch from East Asia to Europe, to expand continental infrastructures including rail and ports. The goal set by China was to boost trade with Iran tenfold to $600 billion within a decade.

Currently, Iran and China do about $20 billion (€16.9 billion) in trade annually. That’s down from $52 billion in 2014 before global oil prices declined and sanctions were reimposed on Iran in 2018 by former US President Donald Trump.

The cooperation roadmap consists of 20 articles, covering Tehran-Beijing ties in “Political,” “Executive Cooperation,” “Human and Cultural,” “Judiciary, Security and Defense,” and “Regional and International” domains, according to the statement released by Iranian Foreign Ministry.

Iran’s MFA spokesman stated that the document is a “roadmap” for trade, economic, and transportation cooperation, with a “special focus on the private sectors of the two sides.”

A strategic Shift by Formation of a New Alliance

Tehran and Washington are at loggerheads over the fate of the 2015 landmark nuclear deal Iran reached with six world powers, from which the US exited in May 2018 and slapped harsh economic sanctions on the Islamic Republic under a so-called maximum pressure policy.

In a meantime, the US relations with China grew increasingly tense under the administration of Donald Trump. Washington continually clashed with Beijing over trade, the South China Sea, Taiwan, Hong Kong, as well as the coronavirus pandemic.

Now, the Iran-China agreement inserts a new strategic pincer in the trouble-hit region of the Middle East for Washington and its allies.

China’s 25-year agreement with Iran underlies a shift in its Middle East strategy as relations with the United States deteriorate, the Chinese former ambassador to Tehran said.

Iran, China, and Russia have strained relations with Washington after Biden’s new administration vowed to remain firm in its dealings, despite a renewed emphasis on diplomacy.

Deeper and wider cooperation between China and Iran, especially when considered in the context of their close ties with Russia and the trio’s adversarial relations with the US, carries a strong message for changing the regional strategic equations.

Beijing’s inking of the deal with Tehran has raised great concerns in Persian Gulf Arab states, Israel, and on top of all, the US in a region that has been a strategic preoccupation of the Americans for decades.

However, this partnership is not to an extent that could endanger China’s relations with Iran’s regional archrival Saudi Arabia and its Arab.  China largely imported oil needs from KSA and Iraq, as well as smaller amounts from Kuwait, the United Arab Emirates, and Oman.

Moreover, Tehran’s growing influence across the Levant (Iraq, Syria, and Lebanon) and Yemen along with its support for the Palestinian cause against Israeli occupation have already troubled these countries.

Iranian leverage in Afghanistan, where American and its allies stuck in for two decades without much success, is another source of concern for Washington.

The Iran-China accord when combined with Terran’s close ties with Russia signals a formation of the strong axis that may lead to boost the Islamic Republic’s regional position and bargaining power in any negotiations with the United States regarding the JCPOA.

America’s constant attempts to pressure and isolate Tehran, especially under former President Trump, has steadily driven Tehran to look to the East and to reach the point of concluding the agreement with Beijing.