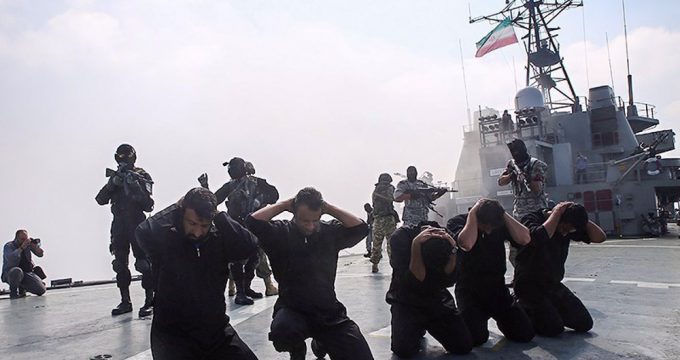 Iranian and Russian naval forces have practiced anti-piracy operations, during which they rescued two hijacked merchant vessels, on the second day of their joint naval maneuvers in the Sea of Oman and the northern part of the Indian Ocean.

According to the maneuvers’ spokesman, Rear Admiral Gholamreza Tahani, the commercial ships sent distress signals to the Chabahar port’s Maritime Rescue Coordination Center (MRCC), before a Sikorsky SH-3D Sea King helicopter of the Islamic Republic of Iran Navy flew over the area and surveyed it.

Tahani added Iran’s fully-indigenous Jamaran destroyer was then deployed to the area, and the participating warships were assigned with the liberation operation in two groups of Iranian and Russian units.

He said commandos with the Islamic Republic of Iran Navy and the Islamic Revolution Guards Corps (IRGC) as well as their Russian counterparts rappelled down onto the deck of the hijacked ship, captured pirates and liberated the vessel as outlined in the scenario.