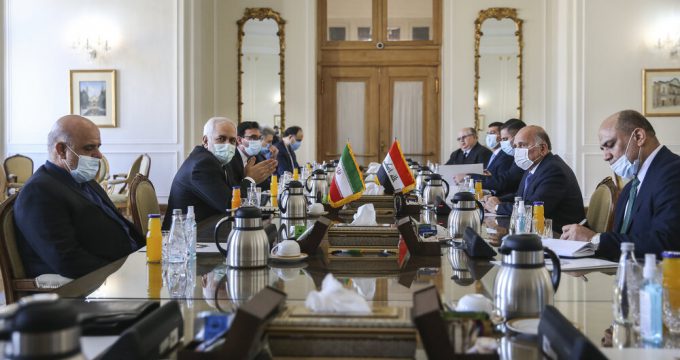 Iranian Foreign Minister Mohammad Javd Zarif has lauded an Iraqi court’s decision to order the arrest of former US president Donald Trump for the assassination of top Iranian anti-terror commander Lieutenant General Qassem Soleimani and his Iraqi comrade Abu Mahdi al-Muhandis, saying ending the presence of US forces in the region would be the best response to such a terrorist act.

During a meeting with his visiting Iraqi counterpart Fuad Hussein in Tehran on Wednesday, Zarif thanked the Iraqi government for pursuing the judicial process about the assassination of the two prominent anti-terror commanders, expressing hope for the punishment of the perpetrators and organizers of the criminal act through legal proceedings.

“Putting an end to the presence of US forces in the region would be the best response to this terrorist act,” he said.

Trump’s arrest warrant, issued by Baghdad’s Rusafa investigation court on January 7, applies to the former US president under Article 406 of the Iraqi penal code, which provides for the death penalty in all cases of premeditated murder.

The court said at the time that preliminary inquiry had been completed, but “investigations are continuing in order to unmask the other culprits in this crime, be they Iraqis or foreigners.”

Elsewhere in his remarks, Zarif called for the establishment of joint economic commissions between Iran and Iraq, expressing hope that agreements reached between the two neighboring countries in the fields of industrial parks, border markets, trade and pilgrimage, transportation of goods and banking transactions would be implemented as soon as possible.

Earlier in the day, the secretary of Iran’s Supreme National Security Council (SNSC) hailed the arrest order issued by the Iraqi court for Trump over the assassination drone strike on Lt. Gen. Soleimani and the Popular Mobilization Units deputy chairman, emphasizing that perpetrators of the terrorist crime must be harshly punished.

“We must not allow the blood of the martyrs Abu Mahdi al-Muhandis and Qassem Soleimani to go in vain, and organizers as well as perpetrators of this terrorist crime must be prosecuted and severely punished,” Ali Shamkhani said in a meeting with the visiting Iraqi foreign minister in Tehran.