Iranian Foreign Minister Mohammad Javad Zarif reacted to the end of Donald Trump’s tenure as the US president, saying the hawkish president and his administration are relegated to the dustbin of the history in disgrace.

“Trump, Pompeo & Co. are relegated to the dustbin of history in disgrace,” Zarif tweeted late on Wednesday.

“But the memories of Gen Soleimani & the 1000s murdered, maimed & starved of food & meds by Trump’s state—& economic—terrorism & crimes against humanity, will shine on,” He added.

The top diplomat underlined that “perhaps new folks in DC have learned” from the grave experiences of the former lame-duck president. 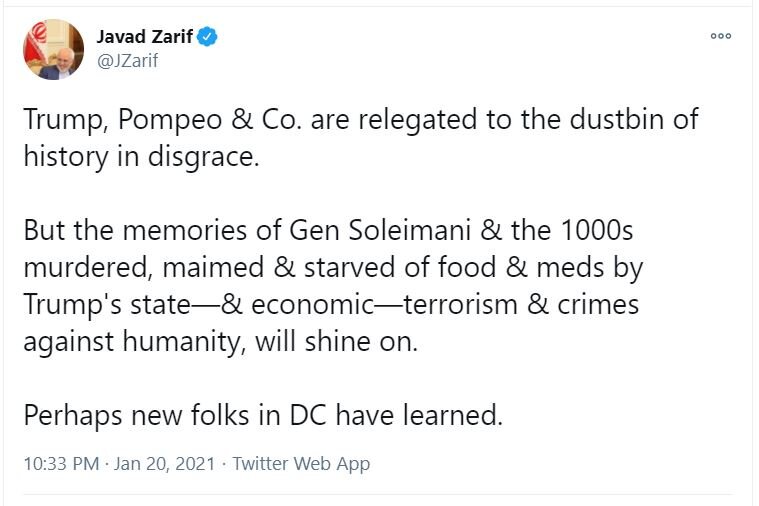 Joe Biden was sworn in Wednesday as the 46th president of the United States on Wednesday, marking the official start to an administration that must now turn its attention to the turmoil and deep divisions caused by hawkish Donald Trump in different arenas.

The ceremony was held at the Capitol on Wednesday under strict and heightened security in the wake of the violent and deadly breach of the Capitol by the supporters of the outgoing President Donald Trump.