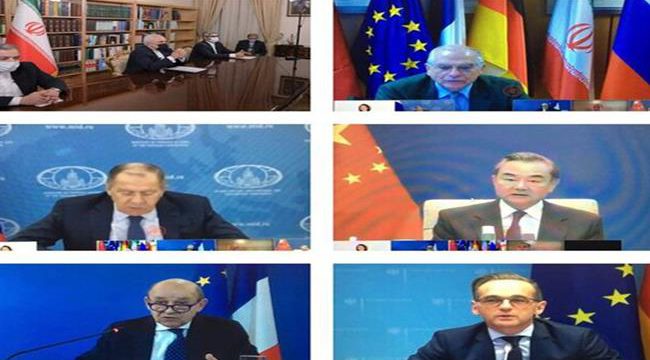 The remaining member states to a groundbreaking nuclear deal between Iran and world powers, officially known as the Joint Comprehensive Plan of Action (JCPOA), have reiterated their commitment to preserving the agreement and stressed their respective efforts in this regard.

The announcement came following a ministerial meeting of the E3/EU+2 — France, Germany, Britain, China, Russia plus Iran, which was held virtually on Monday. The meeting was chaired by the European Union’s foreign policy chief Joseph Borrell.

They said the full and effective implementation of the JCPOA by all signatories remains “crucial,” emphasizing the need for addressing ongoing challenges in the way of the deal’s implementation, including nuclear non-proliferation and sanctions lifting commitments.

“Ministers underscored the important role of the IAEA (International Atomic Energy Agency) as the sole impartial and independent international organization mandated by the UN Security Council to monitor and verify the implementation of the nuclear non-proliferation commitments under the JCPOA,” the statement said, calling for the continuation of “good faith cooperation” with the agency.

According to the statement, the participants once again reiterated that the JCPOA, which has been endorsed by UN Security Council Resolution 2231, is a “key element of the global nuclear non-proliferation architecture and a significant achievement of multilateral diplomacy that contributes to regional and international security.”

The six foreign ministers also reiterated their “deep regret” over US President Donald Trump’s unilateral withdrawal from the agreement and stressed Resolution 2231 remains fully in force.

They also agreed to continue dialogue “to ensure full JCPOA implementation by all sides.”

Pointing to the prospect of the US return to the multilateral agreement, the ministers underlined their readiness to positively address the issue in a joint effort.

With Ministers, we also acknowledged the prospect of a return of the US to the #JCPOA and underlined our readiness to positively address this in a joint effort. Our joint statement ⬇️ https://t.co/3ganv3x87Y

Trump, a hawkish critic of the landmark nuclear deal unilaterally withdrew Washington from the agreement in May 2018, and unleashed the “toughest ever” sanctions against the Islamic Republic in defiance of global criticism.

In an interview with the Persian-language newspaper Hamshahri, which published on Sunday, the Iranian Foreign Ministry spokesman said the historic nuclear agreement has been endorsed by Resolution 2231 and all UN member states are bound to implement it.

Saeed Khatibzadeh added that the United States, which was a signatory to the nuclear deal “unilaterally ended its membership and after that, outrageously violated Resolution 2231 both by refraining from implementing its own commitments and preventing other signatories from fulfilling theirs.”

Speaking at the 17th Joint Commission to the JCPOA via virtual video conference on Wednesday, Iranian Deputy Foreign Minister for Political Affairs Abbas Araqchi said safeguarding the deal is not a one-man job, urging other signatories to keep their side of the bargain.

“Iran cannot undertake all the costs of implementing the JCPOA and the illegal behavior of others, and others need to pay a price for protecting the JCPOA,” he said, adding, “The European parties always want only Iran to show restraint towards all illegal and hostile behaviors, whether it is US sanctions or acts of sabotage in Natanz and assassination of its nuclear scientists.”