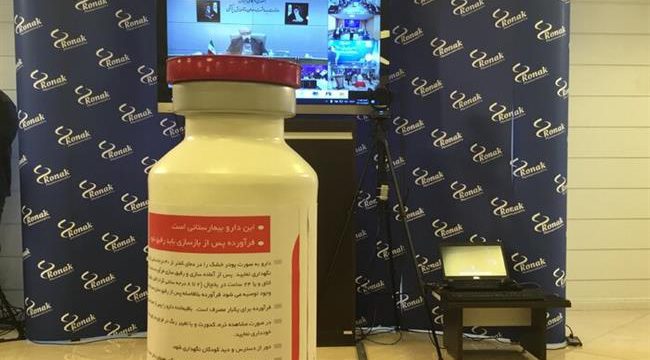 Iranian pharma firm starts making remdesivir on its own formula

Iran has become one of the few countries in the world to have the know-how to make antiviral drug remdesivir as a pharmaceutical company starts manufacturing the medication on a formula developed by the Iranian researchers.

The official IRNA news agency said on Tuesday that Iranian health minister Saeid Namaki had virtually supervised the launch of remdesivir production by Ronak Darou, a company whose manufacturing plant is based in an industrial town nearly 100 kilometers to the southwest of Tehran.

Ronak Darou’s deputy CEO said that domestic manufacturing of remdesivir had become possible after three months of research in the company.

“It quickly raises the oxygen levels in the body of the patient since the day it is administered through injection,” said Maleki, adding that the drug will also be available in the form of tonics.

He said that some 80,000 vials of the Iranian version of remdesivir will be manufactured in each working shift in the company.

“This fully ensures the domestic demand and the surplus is planned to be exported to countries like Venezuela, Oman and Iraq,” said Maleki

Remdesivir is patented by Gilead Sciences, a major pharma firm based in the US. The company has outlicenced the drug to several firms in countries like India and Pakistan amid a surge in demand for a medication that is believed to be highly effective in treating coronavirus patients.

However, Iran has been effectively barred from accessing the drug on a mass scale mainly because of a series of American sanctions that hamper trade with the country.

The US has repeatedly denied it is barring Iran’s access to medicines needed to treat coronavirus patients despite recurrent reports showing the opposite is true.

Iran has been grappling with high rates of coronavirus infections since the disease erupted in the country in late February. Government authorities have mostly relied on domestic companies for supplies of drugs and medical equipment o treat the patients.