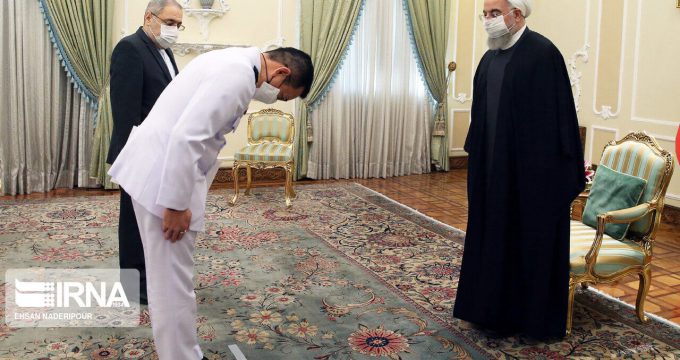 President Hassan Rouhani on Tuesday received copies of credentials of the new ambassadors of seven countries to Tehran.

The new ambassadors of Tunisia, Uganda, Syria, Indonesia, Mexico, Thailand and Japan held separate meetings with Rouhani on Tuesday and officially started their mission by submitting their credentials to the Iranian president.

During the meetings, Rouhani called for all-out efforts to strengthen relations between the Islamic Republic of Iran and their respective countries.

During his meeting with the new Tunisian ambassador, Samir al-Mansour, Rouhani appreciating the positive stance of Tunisia toward Iran and its support in the international forums, especially in the face of the oppressive actions and sanctions of the US government.

The President expressed hope that relations between the two countries would develop and deepen in all fields.

He said that the Republic of Tunisia as a Muslim, brother, friend and important country in North Africa can be a gateway for Iran to African countries.

The new Tunisian Ambassador also stressed that his country has a strong will and special attention to develop comprehensive ties with Iran as a friendly, brotherly and Muslim country.

He said Tunisia can serve as a platform for Iran’s relations with Europe and Africa. 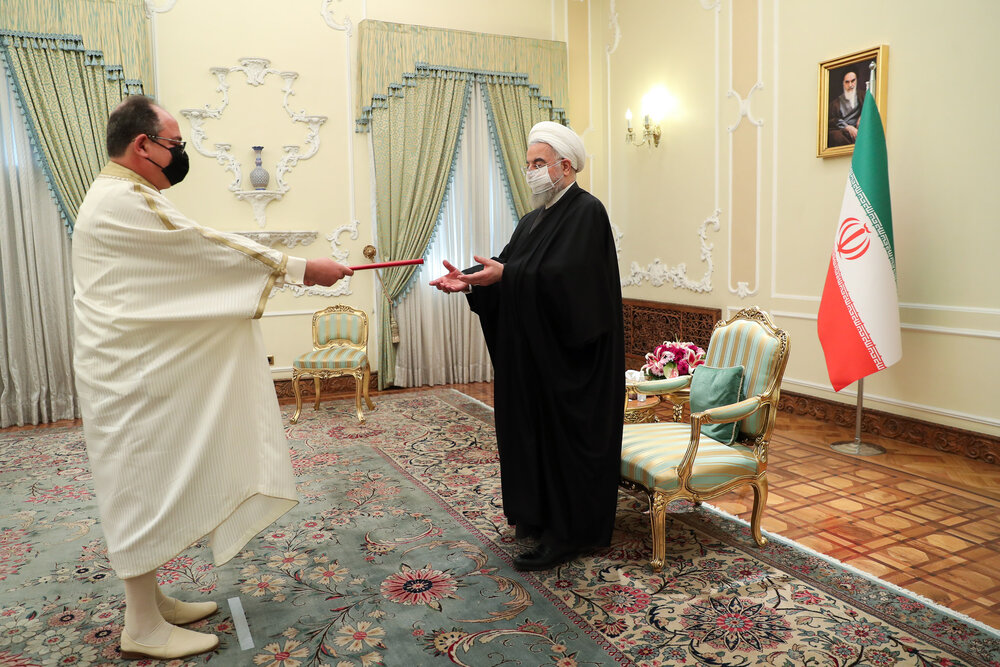 Call for sci-tech cooperation with Uganda

Rouhani, in his meeting with Uganda’s newly-appointed ambassador, Mohammad Tezikoba, described the Tehran-Kampala relations “friendly and developing” and underlined that the Iran is ready to transfer its scientific and technical experiences to Uganda as a friendly country.

In response to the Ugandan envoy’s request, Rouhani said Iranian companies can have a more active presence in Uganda

The Iranian government will encourage domestic companies, especially those active in the fields of industry, science and technology, to participate in development and infrastructure projects of Uganda.

In response to the invitation of the President of Uganda to pay an official visit to Kampala, Rouhani expressed hope that this visit would take place at an appropriate time.

Mohammad Tzikuba said, “Uganda seeks to expand cooperation with Iran in all fields and considering the great scientific and technical progress of Iran, our government wants a more active presence of Iranian companies in Uganda.” 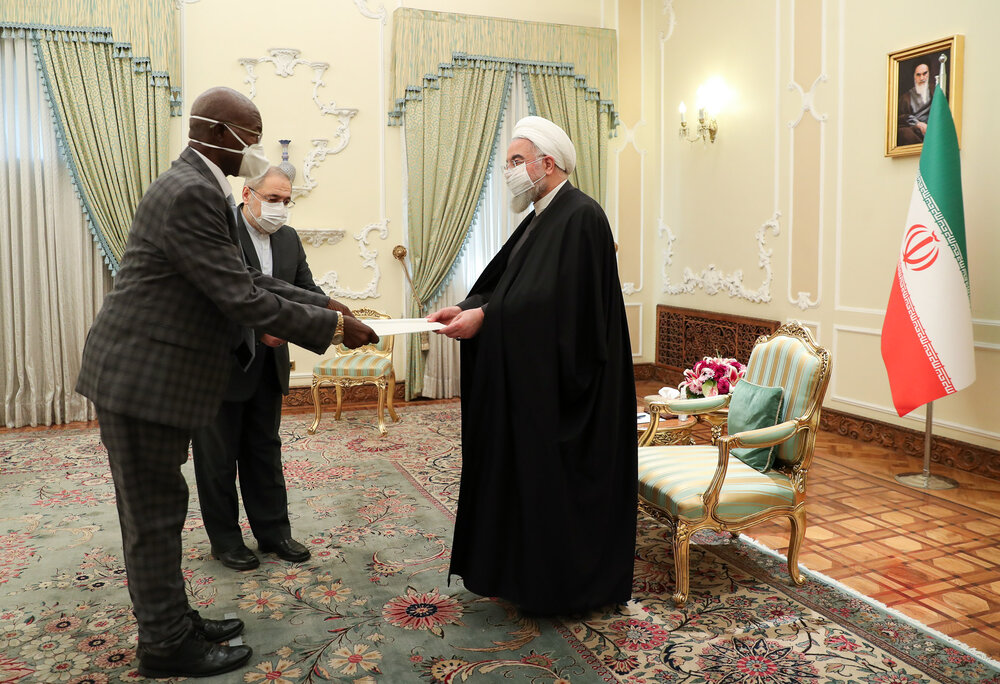 Iran to stand By Syria in fight against terrorism

In the meeting with Syria’s ambassador to Tehran Shafiq Dayoub, President Rouhani said Iran will stand by the Syrian people and government until the final victory over terrorism, the return of refugees and the reconstruction of Syria.

The president described the Iran-Syria relations as strategic, friendly and fraternal throughout history and said, “In recent years, the Islamic Republic of Iran has always supported the Syrian people in defending the truth and fighting terrorism until the final victory.”

Rouhani expressed his condolences on the death of the late Syrian Foreign Minister Walid Muallem and appreciated his efforts to strengthen relations between the two countries.

In the framework of the Astana talks, Rouhani said, Tehran will continue its efforts to help fully establish stability and peace in Syria.

Shafiq Dayoub, for his part, said, “The Syrian government and people want to preserve all the valuable achievements that have been realized in the past four decades in strategic relations with the Islamic Republic of Iran.”

Appreciating the support of the Iranian people and government to the Syrian people in difficult times, the new Syrian ambassador added, “Syria is still fighting terrorism in all its forms.”

He also thanked the diplomatic activities of Iran for the establishment of full peace and stability in Syria and its efforts for the Constitutional Committee of this country, a plan that targets the security and stability of the region will stand. 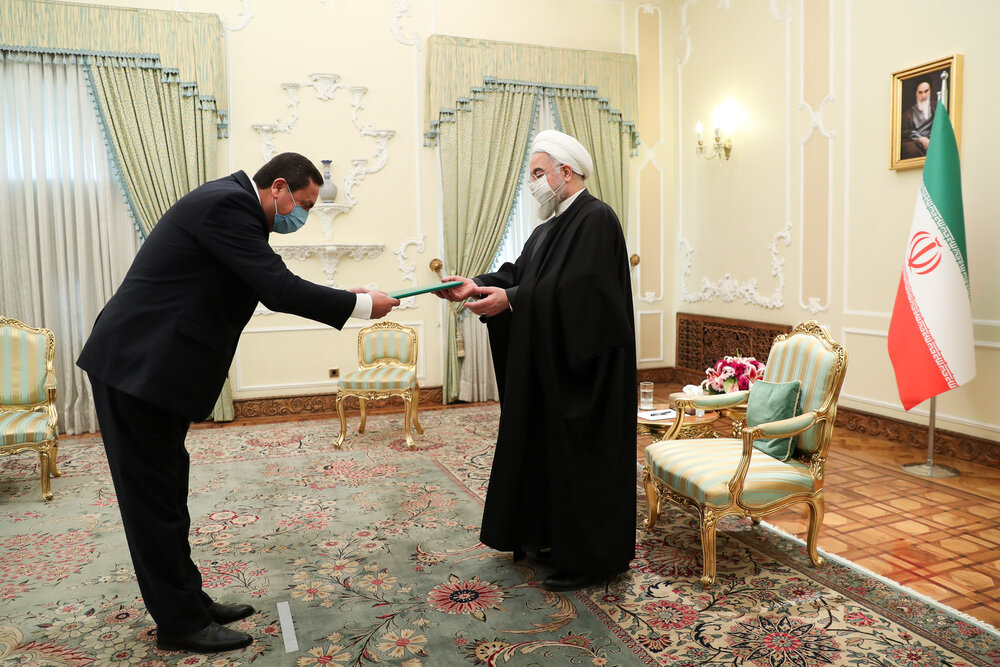 He expressed Iran’s readiness to deepen trade and industrial relations with Mexico. He also underlined the importance of cooperation between companies on both sides.

Referring to the friendly relations between Iran and Mexico and pointing to the opportunities for cooperation between the two countries in all fields, the president expressed hope that Tehran-Mexico City relations would expand further.

The new Mexican ambassador also stressed that Iran is not only a friendly country but also an ally of his country.

“Mexico has made every effort to expand cooperation and improve bilateral relations with Iran,” he stressed. 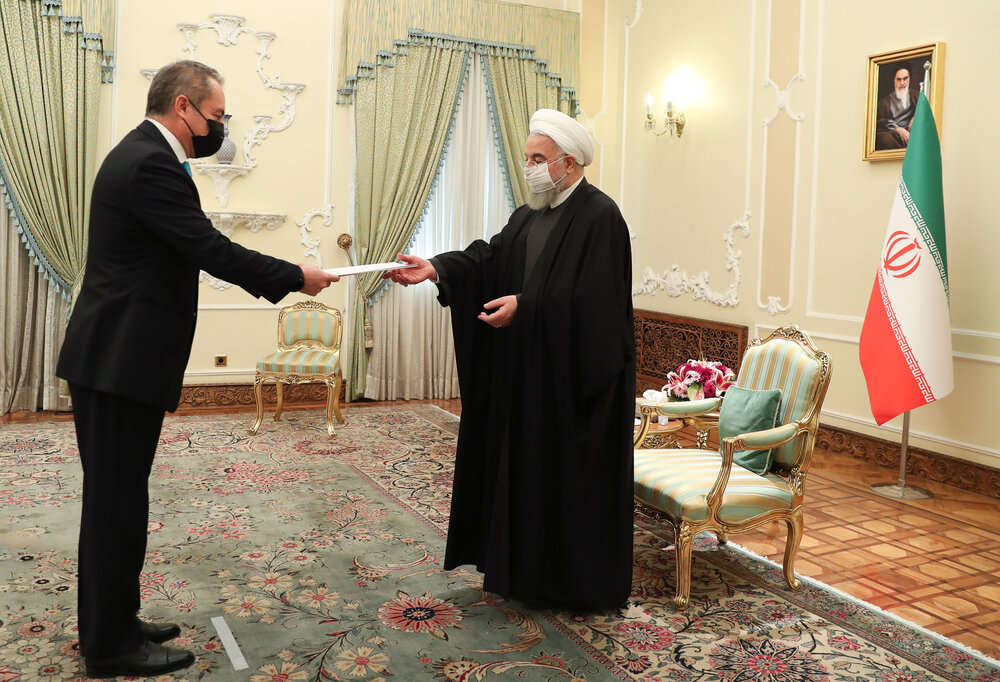 In a meeting with the Indonesian Ambassador to Tehran Ronny Prasetyo Yuliantoro, President Rouhani referred to the will and decision of the Islamic Republic of Iran to increase cooperation and develop economic, cultural, scientific and technological relations with the Republic of Indonesia.

Ambassador Yuliantoro, for his part, pointed to the Indonesian president’s emphasis on expanding the two countries’ relations in all fields, the need for mutual cooperation and the continued presence of Iranian and Indonesian companies in the two countries, the implementation of joint projects, and using new opportunities for cooperation. 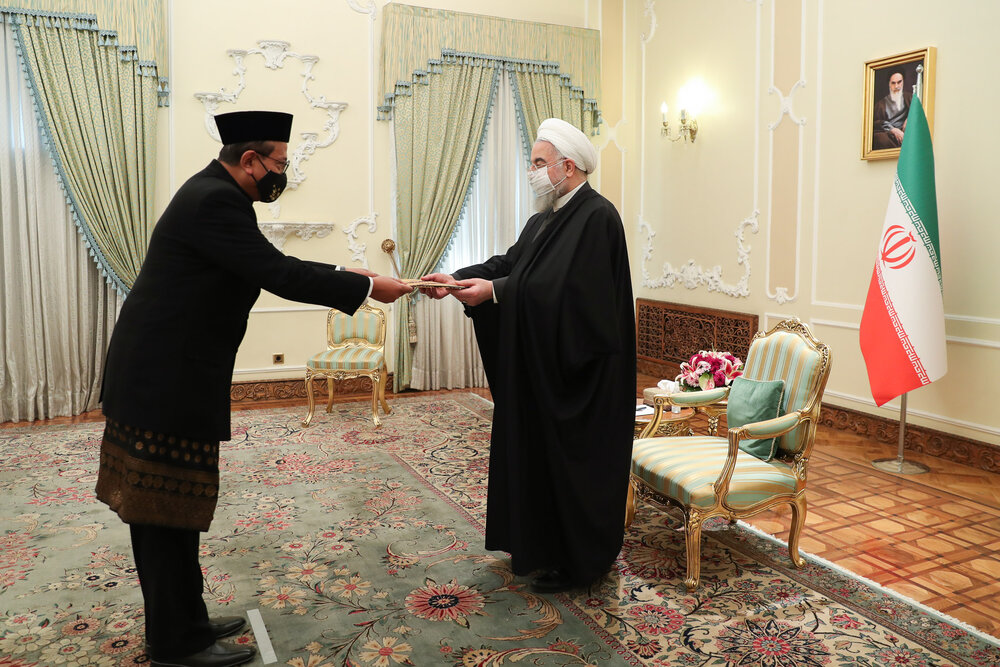 The President said that ‘great capacities’ exist for enhancing the level of bilateral ties, hoping for the realization of these potentials during Pongprapapant’s term.

The Thai envoy for this part said that his country is determined to cement ties with Iran in fields of mutual interest. Thailand asks for the increased presence of Thai students in Iran to study in various fields, he said, noting that this can play an important role in strengthening the cooperation between the two nations and the two governments. 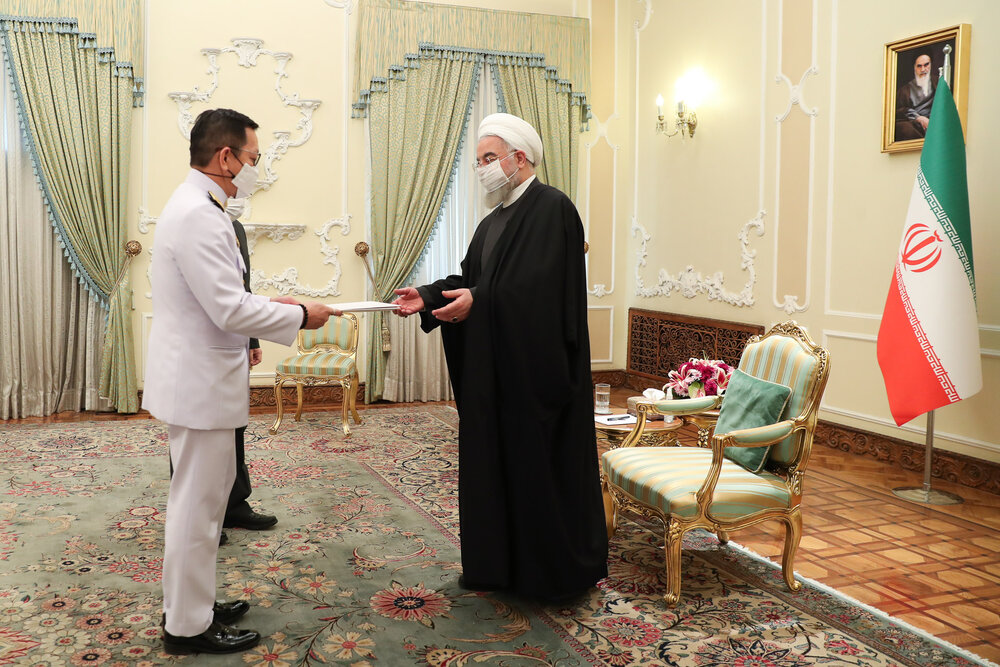 In a meeting with the newly-appointed Japanese ambassador to Tehran Aikawa Kazutoshi, President Rouhani said that Tehran welcomes expansion of cooperation with Tokyo in different fields.

Rouhani pointed to the need for accelerating the implementation of bilateral agreement, and also for unfreezing the Iranian assets in Japanese banks. “Iran always welcomes the expansion of economic and scientific cooperation with Japan and we hope to see a change in ties in the new atmosphere and an increased presence of Japanese companies for advancing different national plans in the fields of science and technology,” he said.

For his part, the Japanese envoy highlighted that Tokyo is determined to increasing cooperation with Tehran in fields of mutual interest.

Iran and Japan have always been good partners, said Kazutoshi, adding that the implementation of prior agreements will create vast opportunities for further cementing of ties.

Prime Minister Yoshihide Suga is determined to continue the path of Shinzo Abe for expanding cooperation with Iran, he said, also voicing Japan’s full support for the JCPOA. 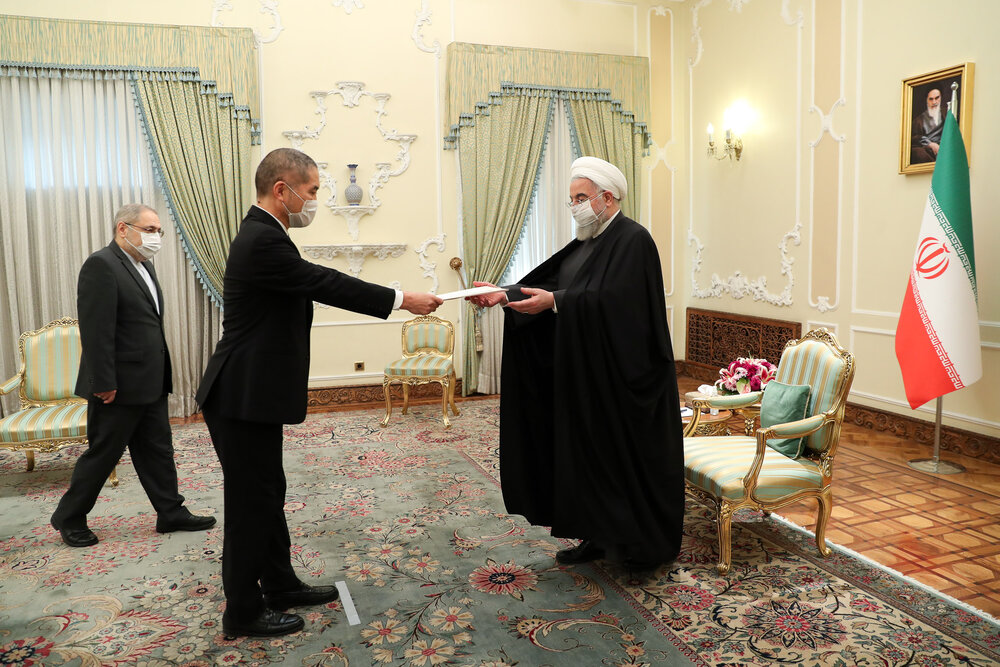