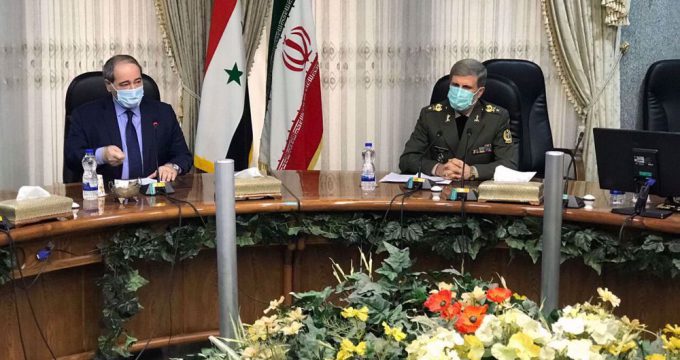 The Islamic Republic is determined to continue cooperation with Syria on the reconstruction of the war-ravaged country, the Iranian defense minister says.

Speaking in a meeting with the visiting Syrian Foreign Minister Faisal al-Mekdad in Tehran on Tuesday, Brigadier General Amir Hatami congratulated Mekdad on his appointment as the foreign minister.

The Iranian defense chief had a say on the assassination of two top Iranian figures, General Qassem Soleimani and nuclear scientist Mohsen Fakhrizadeh. “These acts of hostility by the enemy stem from its total desperation.”

General Soleimani, the commander of the Quds Force of the Islamic Revolution Guards Corps (IRGC), was assassinated along with the deputy head of the Popular Mobilization Units of Iraq, Abu Mahdi al-Muhandis, in a US terror drone strike authorized by President Donald Trump on January 3.

Fakhrizadeh, the head of the Iranian Defense Ministry’s Organization of Defensive Innovation and Research, was martyred on November 27 near the Iranian capital, Tehran.

The Syrian foreign minister condemned the late November assassination. He said it was a source of pride that Iran and its armed forces keep progressing despite the animosity on the part of the United States and the Zionist regime.

The top Syrian diplomat arrived in the Iranian capital on his first foreign visit late Sunday. He assumed the position last month after his predecessor Walid al-Muallem passed away.

The Islamic Republic was the first country to rush to the assistance of Syria in the wake of a crisis in 2011.