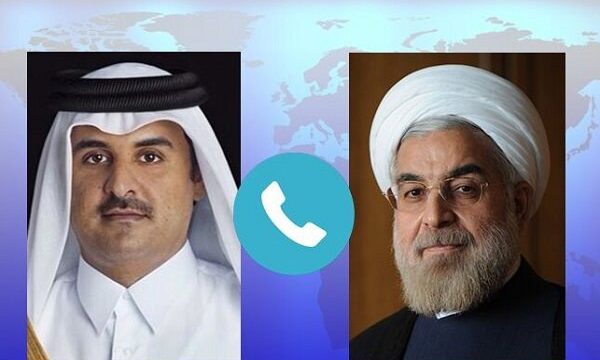 Pres. Rouhani: Israeli regime, cause of ‘insecurity, instability’ in region

Iranian President Hassan Rouhani said that Zionist regime is the main cause of insecurity and instability in the region.

Speaking in a telephone conversation with the Emir of Qatar Sheikh Tamim bin Hamad Al Thani on Wed., Rouhani said, “I hope that with the new developments happening in the arena of international relations, hostile policies of some countries in the region will be adjusted and will further witness strengthening of the opportunity for dialogue and reaching an understanding in the region.”

While emphasizing the developing and deepening bilateral ties between Tehran and Doha in all areas of mutual concerns especially trade and economic ties, Rouhani added, “Accelerating the implementation of agreements inked between the two countries will be in favor of both nations and region as well.”

Then, he pointed to the agreements reached between senior officials of the two countries in the course of the Iran-Qatar Joint Economic Commission meeting in the historic city of Isfahan and added, “It is hoped that we will witness implementation of all the agreed plans and flourishing relations between the two countries of Iran and Qatar.”

Regional countries should cooperate and collaborate with each other through wisdom, rationality and honest dialogue, Rouhani said, adding, “Unfortunately, paving suitable ways for the Zionist regime will cause spread of insecurity and instability in the region and it is really surprising to us that some neighboring countries consider their security in the shadow of their relationship with the criminal Zionist regime which is the enemy of all regions and Islamic countries.”

Rouhani further noted that regional countries can settle their problems themselves amicably and peacefully, adding, “There is no doubt that the two countries of Iran and Qatar will witness better conditions in regional ties with the help of each other.”

Emir of Qatar, for his part, called relations between Iran and Qatar ‘strategic and developing’ and emphasized that implementation of agreements reached between the two countries will be in line with interests of the two nations.”

Qatar will make its utmost effort to implement these agreements inked between the two countries, he stressed.

“We believe that cooperation between Iran and Persian Gulf regional states should be developed more than ever in all fields including security of regional waters, so that Iran plays a very important role in this respect.”

In this bilateral talk, the Emir of Qatar invited President Rouhani for an official visit to Qatar.