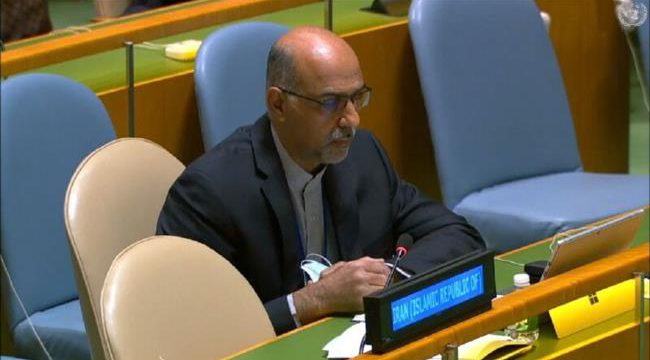 ran’s representative at the Third Committee of the UN General Assembly has warned that the recent increase in hate-mongering speeches by Western politicians is a serious threat to human rights.

Mohammad Zare’ian made the remarks while addressing a virtual meeting of the committee on Thursday evening, which was held on the subject of a report by the UN Human Rights Council.

Expressing concern about the hateful remarks recently made by politicians in the West, Zare’ian said the Islamic Republic fully believes in freedom of speech but not the sort that incites hatred against others.

“Muslims, migrant communities and Africans have been the target of dangerous rhetoric, which is a flagrant abuse of freedom of expression,” the Iranian official said. “We also express our serious concern about the increase in insults to Muslim sanctities in Western countries.”

Over the past two months, French President Emmanuel Macron has attacked the faith of nearly two billion Muslims worldwide on several occasions.

In September, Macron defended the “right to blaspheme” in France after French satirical magazine Charlie Hebdo republished sacrilegious cartoons of the Prophet Muhammad (PBUH). On October 2, he claimed in a speech that Islam was “in crisis globally” and announced his plan “to reform Islam” to bring the faith more in line with French values.

Numerous Muslim states and leaders have issued condemnatory statements against Macron, and thousands-strong protests have been held worldwide to protest his stance.

Elsewhere in his remarks, Zare’ian censured as “illegal and inhumane” the imposition of unilateral sanctions against countries, and said the restrictive measures “openly target the daily lives of ordinary citizens without discrimination and are designed to undermine any achievement of social development.”

The Iranian diplomat said the implementation of unilateral and coercive measures continues to fundamentally violate the human rights of all countries, and that “Such sanctions, due to their extraterritorial nature and their illegal application outside national borders, also undermine human rights across the world.”

US President Donald Trump, a stern critic of the Iran nuclear deal, unilaterally pulled Washington out of the historic pact in May 2018 and unleashed the “toughest ever” sanctions against the Islamic Republic in defiance of global criticism in an attempt to strangle the Iranian economy, particularly in the oil sector.

The US government claims humanitarian goods are exempt from its sanction. But a web of sanctions tied around Iran over years has made foreign banks and companies extremely wary of engaging in any trade with the country.

Iran has also said that the unilateral US sanctions imposed on the country have seriously hampered its fight against the coronavirus pandemic.