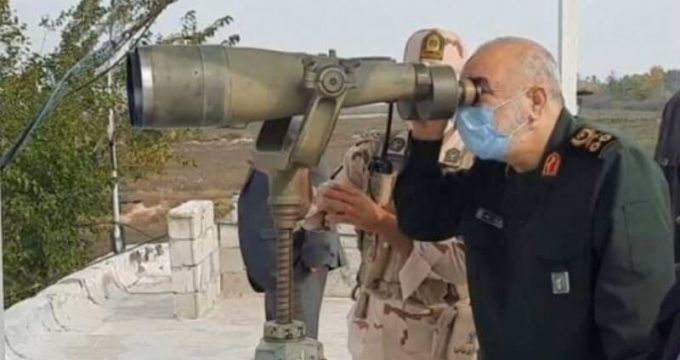 The Commander of the Islamic Revolution Guards Corps said the Republic of Azerbaijan and Armenia have been given warnings about the presence of terrorists near the Iranian border amid the escalation of fighting between the two neighbors over Nagorno-Karabakh.

Major General Hossein Salami on Thursday visited Iran’s northwestern border areas in the province of Ardabil, close to the regions where Azerbaijan and Armenia have been exchanging fire in recent weeks.

The commander said he has visited the border zone in order to make sure that the Iranian border residents are in full security.

After meeting a group of border guards in the area, the general said the Iranian military forces are fully prepared to protect the country in all circumstances and would give a “decisive response” to any act of aggression.

Iran has deployed various military units to the northwestern border areas, he added, noting that the two warring sides in the Nagorno-Karabakh conflict have been given warnings about the presence of terrorist forces near the Iranian boundaries.

In remarks on Tuesday, Leader of the Islamic Revolution Ayatollah Seyed Ali Khamenei described the war between Azerbaijan and Armenia as a bitter incident that threatens the security of the region.

“International borders should be respected and the two sides should not transgress against the borders of other countries. The integrity of international borders should be protected and terrorists should not be allowed to deploy their forces near the borders. According to the reports that we have received, although some people deny them while there are reliable reports confirming this, a number of terrorists from here and there have become involved in this war,” the Leader stated, warning that terrorists will be dealt with severely if they approach the Iranian border.