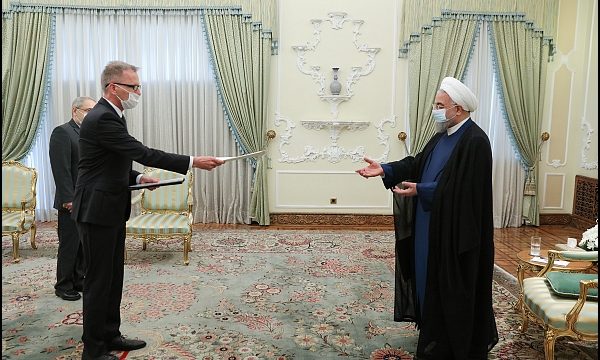 Iran’s President Hassan Rouhani pointed to the illegal intervention of Washington in the process of IMF’s $5 billion loan to Iran, noting that Tehran expected more from the three European countries in that case.

He made the remarks on Tuesday while receiving the credentials of the new German envoy to Tehran Hans-Udo Muzel.

Rouhani hailed the position of Berlin against US unilateralism, stating that, “The reactions of the three European countries against the illegal and false measures of America in reinstating cruel sanctions against the Iranian nation and also their supporting of the Resolution 2231 has been rational.”

He described ties between Iran and Germany as ‘friendly’, adding, “Bilateral cooperation should be expanded regardless of the illegal US sanctions.”

Reffering to Iran’s request for receiving a $5 billion loan from IMF to address the medical needs of the Iranian nation, Rouhani said the IMF board had agreed with the request but US intervened to block the process. “The Islamic Republic expected the E3 to stand against America’s pressures so that with the help of the loan Iran could fulfill the medical needs of its people.”

The envoy, for his part, said that Germany sees the issue of preserving the JCPOA as its responsibility. He said that bilateral ties should be enhanced given the current tough situation.