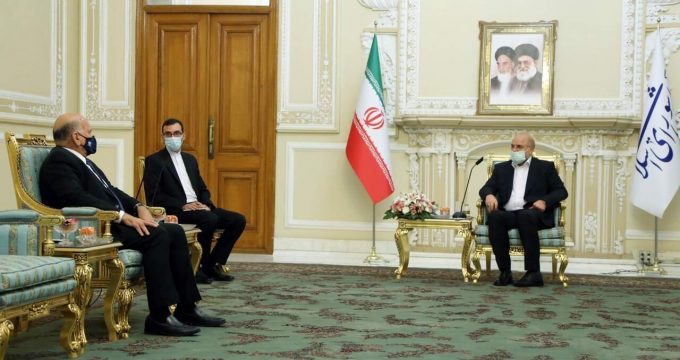 Parliament speaker: US terrorist attack on Martyr Soleimani an insult to Iraqi gov’t

Iranian Parliament Speaker Mohammad Baqer Qalibaf said late on Saturday that the terrorist attack on Martyr Qasem Soleimani was an insult to the Iraqi government and violation of its independence.

In a meeting with the Iraqi Foreign Minister Fuad Hussein late on Saturday, Qalibaf added that Iran has always highlighted the sovereignty, security, independence and integrity of Iraq.

“We believe that the current Iraq has a positive, important and influential role in the region,” he said.

Qalibaf also blasted the US interference in the region and presence of Daesh terrorists as a scourge of peace, stability and prosperity in Iraq and region.

Certain regional countries, under US pressure, began to normalize relations with the Zionist regime. Certainly, the Islamic world should not remain silent on this issue because the issue of Palestine is the first priority of the Islamic Ummah, he said.

Reaffirming Iran’s support for Iraq as an Islamic and neighboring state, Qlaibaf recalled that one of the most important demands of the Iraqi people, government and parliament is US withdrawal from this country, which is the root of insecurity.

The only way out of the problems is US exit from Iraq, he reiterated.

Fuad Hussein, for his part, described Tehran-Baghdad ties as strategic and called for further strengthening them.

“Today, I traveled to the neighboring and brotherly country of Iran, to which the history and geography of our country are linked and we have common political and economic interests,” he said.