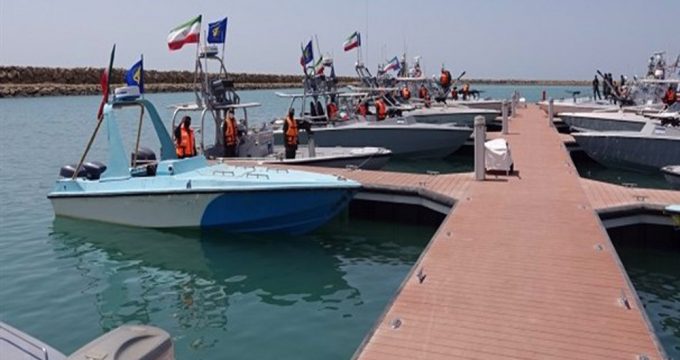 Iran’s IRGC opens new naval base at Strait of Hormuz

The Islamic Revolution Guards Corps (IRGC) has opened a new naval base at Sirik, a coastal Iranian town east of the strategic Strait of Hormuz in the Persian Gulf.

The new base, named after Martyr Rahbari, was launched in a Wednesday ceremony attended by IRGC Chief Commander Major General Hossein Salami.

The base, whose construction started six years ago, has been built in an area of 31 hectares with the aim of giving the country full control over the arrival and departure of ultra-regional vessels in the Persian Gulf, Strait of Hormuz, and the Sea of Oman.

Addressing the opening ceremony, General Salami said the naval base has been built in the country’s most strategic region, and serves both defensive and offensive purposes in the strategic region of Persian Gulf and Strait of Hormuz.

“With the opening and unveiling of this base, the country’s combat operations, ship operations, reconnaissance as well as defensive and offensive operations in the Persian Gulf will further develop,” he added.

The naval base was opened a few days after a US aircraft carrier for the first time in ten months sailed through the Strait of Hormuz and entered into the waters of the Persian Gulf, as Washington has threatened to illegally extend an expiring arms embargo on Iran.

The US 5th Fleet said in a statement that the strike group led by the USS Nimitz and including two guided-missile cruisers and a guided-missile destroyer sailed into the Persian Gulf to operate and train with US partners.

In another ceremony on Wednesday, the naval fleet of the Islamic Revolution Guards Corps received 188 combat drones and helicopters developed by Iranian aviation experts.

Speaking during a ceremony in the southern port city of Bandar Abbas, IRGC Navy Commander Rear Admiral Alireza Tangsiri said the drones can be used for aerial photography in combat zone to help with the acquisition of moving and stationary targets at sea.

He said the unmanned aerial vehicles (UAVs) are also capable of monitoring all maritime movements.

“With the drones having joined [the naval fleet], all missions of the IRGC navy will be covered by indigenous Iranian drones,” Tangsiri said.

In the most recent mission, he explained, IRGC drones intercepted the American USS Nimitz aircraft carrier, along with its flotilla of navy ships, before they cruised through the Strait of Hormuz and into the Persian Gulf last week.

General Salami also said in the same ceremony that Iran’s naval power has not remained confined to the surface of the sea and the Navy has promoted its capabilities in aerial and subsurface warfare.

“We are decisively and steadily bolstering our power. We will never stop and will increase the range of our weapons,” he said

He said the United States is today largely despised by the people of the world and even Americans themselves.

“All world nations are standing against the United States, and so are we. We will grow stronger day by day. The Iranian nation’s patience and presence shines before the eyes of the world, and the world learns lessons of resistance from Iranians,” Salami added.