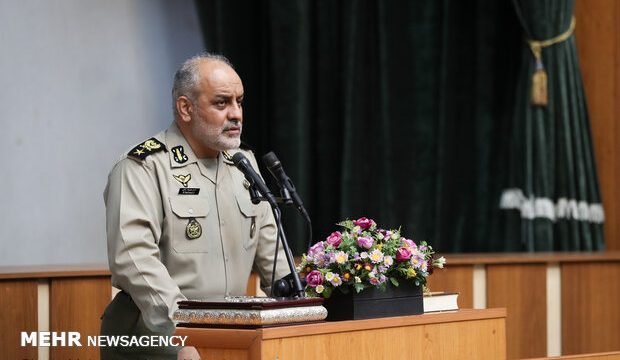 World must boycott those who only pretend to favor peace

MNA – The Commander of Iran Army’s University of Command and Staff said that the world should move towards peace, and in this regard, those who are are making a pretense of being adherent to peace should be boycotted.

While speaking at the opening ceremony of the ‘peace and defense book fair’, Brigadier General Hossein Valivand Zamani, the Commander of Iran Army’s University of Command and Staff (DAFOOS) stated, “A brief look at the recent events and wars in the world demonstrates some significant points that the most wars have been fought for extravagance, for power, and for misunderstandings of peace.”

Emphasizing the need for the pathology of peace barriers, he believed that joint cooperation for the affairs of refugees, prisoners, and missing persons, holding a joint peace summit, establishing international workshops on peace, defense and war should be held in war and defense universities of the countries.

He went on to say, “We are ready to cooperate with our allies and friends in the field of conducting researches on the issue of peace and sending some experts for peace education.”

“We believe that the world should move towards peace, therefore we should boycott those who only pretend to be adherent to peace” he stressed.

The commander of the Dafoos also noted, “As someone who is dressed in sacred military uniform, I’d say that the peacekeepers are those who are ready to fight via their uniform.”