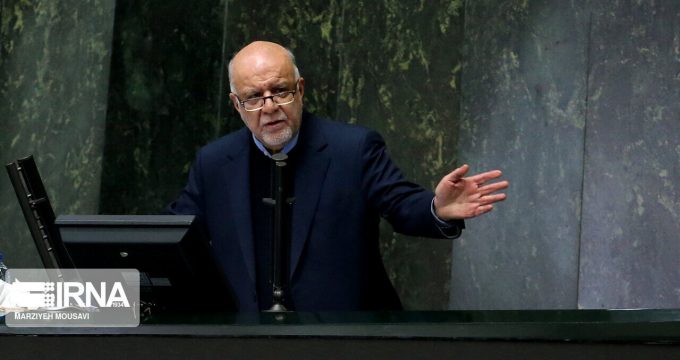 IRNA – Iranian Petroleum Minister Baijan Zanganeh said on Tuesday that 17 phases pf South Pars Oil and Gas Field have been finalized at sea, adding that Iran with 700 mcm has outperformed Qatar in the joint gas field.

Speaking in Majlis formal session on Tuesday, Zanganeh said Iran has so far invested $150b in South Pars.

He added that various projects started two years ago and 23 contacts were also sign in engineering, procurement and construction (EPC) format.

He noted that Goureh-Jask Crude Oil Pipeline construction will be finalized by the end of the current Iranian year (started on March 20, 2020) and one million cubic meter oil will be transferred from Goureh to Jask for exports.

Referring to development of joint fields as a priority, he said West Karoun oilfields production has reached 400,000 barrels per day seven years ago.

He reiterated that Iran’s petrochemical production capacity will reach to 100 million tons worth $25b by next year.

Elsewhere in his remarks, Zanganeh expressed readiness for providing license, feed and market for downstream sector.

He referred to record of 80 million cubic meters gas exports during the current Iranian year, saying Iran is now one of the biggest exporters of oil derivatives through stock market.