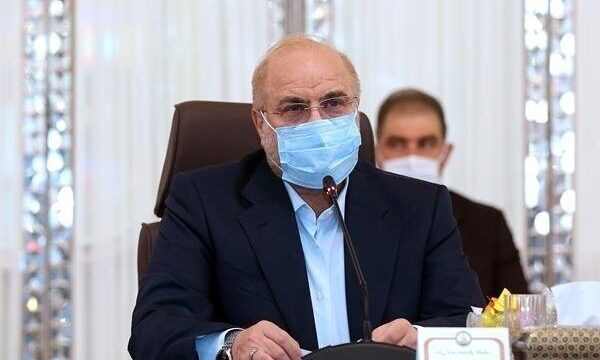 MNA – The Speaker of the Iranian Parliament Mohamad Bagher Ghalibaf said the body is determined to back, strengthen and stabilize domestic stock market.

He made the remarks at the beginning of a Sunday Parliament open session, which followed a two-hour close session about domestic capital and stock market.

Ghalibaf said that the Parliament is determined to support, strengthen and stabilize the stock and capital market and tries to move the available liquidity in the stock market towards production sector in a bid to complete industrial, commercial and factory projects and boost production.

He vowed that the Parliament will do its best to protect the investments of the Iranian people in the capital market.

As reported, the index, fell four percent in the past Iranian calendar week (ended on Friday September 11). Accordingly, the index experienced the fourth weekly drop in a month. It stood at 1.556 million points at the end of the last week.

On Saturday, however, the market opened trading week on a strong note as sell-side pressure eased and sentiments buoyed by new supportive measures announced by the regulator. TEDPIX, gained 27,466 points to pare 1.76 percent of earlier losses and finish trading session at 1,583,746 points.

The fragile recovery was mainly due to the supportive measures adopted by the High Council of Securities and Exchange, the top policy-making body, on Thursday to prop up a bearish market that has lost about 30 percent in little more than a month.

The bourse (stock market) council on Thursday allowed banks and credit institutions to invest in stocks. In addition, the regulator obliged listed companies to use financial instruments, such as treasury stocks and option contracts. Furthermore, the National Development Fund of Iran, the sovereign wealth fund, was mandated to invest 1 percent of its annual revenue in the Capital Market Stabilization Fund, a body created in 2017 to help resolve the credit crunch in the bourse.

It should be mentioned that the index had hit the record high of two million points on August 2, and while it had been experiencing an unprecedented trend of rising over the recent months, it witnessed several days of drop in the past three weeks.

The booming stock market with its successful performance has been welcomed by Iranian investors and shareholders in the almost past seven months.

Considering the forex rate fluctuations, inflation rate, and general economic status quo of the country, Iranians found the stock market a safe haven to gain benefits via making investments and also to keep their monetary assets safe against rial depreciation.