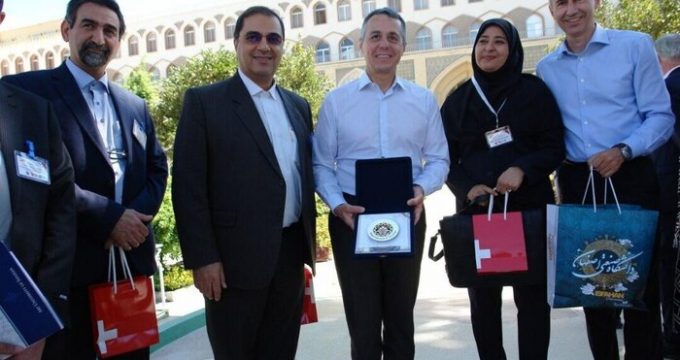 IRNA – Swiss Foreign Minister Ignazio Cassis said on Sunday that his visit to Iran is preparatory to develop cooperation with Iran in science and tourism.

Cassis arrived in Isfahan on Saturday and met with city officials and academics after having visited some of the tourist attractions of the historical city.

He is scheduled to meet with President Hassan Rouhani, Foreign Minister Mohammad-Javad Zarif, and some other high ranking officials on Sunday and Monday to discuss mutual, regional, and international issues, as well as the financial channel the Swiss Government provided for Iran.

He said that cooperation in tourism and science are the advantages for Iran and Switzerland after the coronavirus outbreak.

The Swiss foreign minister said that political experts believe that it is a chance for Iran to take steps for and also a chance for hostile foreign countries to change their approach toward Iran.

Referring to the difficult economic situation created by the US sanctions, Cassis said that scientific diplomacy is a way for further interaction among the countries to advance peace and understanding.

Thanking the hospitality of the officials and people of Isfahan, he said that he would commemorate the 100 years of mutual relations between Iran and Isfahan in an official meeting in Tehran.

He said that relations between the two countries started with signing a peace and trade agreement in late 19th century and have been going on so far, adding that Switzerland has always been seeking peace and tranquility in the region.

Referring to the mediation role of Switzerland between Iran and the US, he said that Switzerland tries to establish the minimums of dialog between the two countries.

He said that he intended to visit the Iranian historical city of Isfahan, birthplace of Foreign Minister Mohammad Javad Zarif, adding that the city is famous as “half of the world” and that Isfahan is a wonderful exceptional city, which has a huge civilization.

Addressing a meeting of officials of Isfahan University of Technology on Saturday, he stressed the need for promoting scientific cooperation with Iran.

Isfahan University of Technology is the coordinator between Iranian universities with Switzerland.

Governor General of Isfahan Province, Abbas Rezaee, said that with naming a day as Isfahan and Switzerland Day, the tourist attraction of Iran and Isfahan and be introduced simultaneously, adding that Swiss mediation efforts with some countries to help peace and calm is a positive approach, with roots in Iran’s religious attitude as well.

He also said that different religions of Islam, Christianity, Judaism, and Zoroastrianism have been living in Iran peacefully with no problems whatsoever.

Switzerland looks after the US interests in Iran as well as the interest section of Canada and Saudi Arabia in Iran.