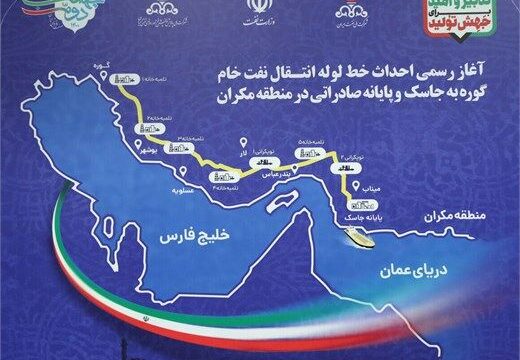 SHANA — The head of Jask Oil Terminal Project said the first phase of the terminal would be launched by the end of the current calendar year, which began on March 21.

According to Pars Oil and Gas Company, Vahid Maleki, said that the project entails systems for measuring or metering crude oil, 6 series of seabed pipelines and three SBMs, adding: “In the first phase, with the aim of early commissioning of the project until the end of this calendar year, a set of metering tools, two 36-inch pipelines, a marine manifold and an SBM will be put into operation.”

He announced a 35% progress in the Jask oil terminal project by late August, adding: “Based on the planned target, 10% monthly progress has been set for this project until the final commissioning stage.”

Maleki said that development of the Jask oil terminal project was awarded to Pars Oil and Gas Company by the National Iranian Oil Company back in June 2019 as the last piece of the major Goreh-Jask crude oil transfer chain.

Jask oil terminal project is aimed at loading a million barrels per day of crude oil on vessels.