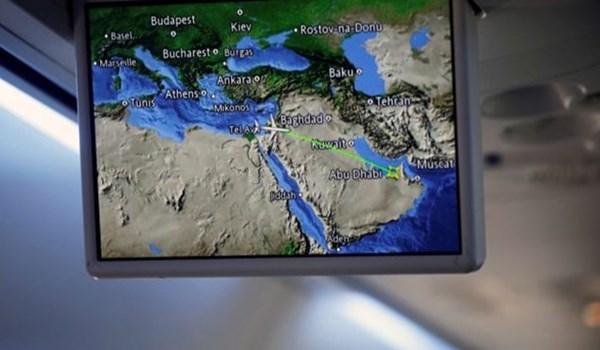 FNA – Social media activists in the Arab world rapped Saudi Arabia for allowing the first-ever commercial flight from Israel’s Ben Gurion airport on Monday to the United Arab Emirates (UAE) through its airspace.

The flight came as a shock to the Palestinians, with Prime Minister Mohammed Shtayyeh saying that “It is very painful for Palestinians to see Israeli plane landing at Emirati airport”.

Immediately after the flight, people in the Arab world rushed to leave thousands of post on social media platforms to condemn Riyadh, saying Saudi Arabia has prevented trips to the country by Muslims for Hajj rituals and has closed its airspace to Qatari flights, but has opened its airspace to an Israeli plane.

Taj al-Sar Othman, a Sudanese journalist and writer, wrote on his twitter page that history will never forget that Riyadh blocked its Muslim neighbors’ travelling to Mecca for Hajj pilgrimage, but allowed an Israeli plane to fly over its sky.

Also, Issa bin Rabi’ah, an Arab activists, wrote on his twitter page that “the Zionist regime has started its move towards a second country as the Israeli plane flew from Tel Aviv to the UAE through Saudi Arabia”.

The recent US-mediated agreement for the normalization of ties between the UAE and Israel has already drawn stern reactions from the Muslim world, Palestinians in particular, and has been described as an act of treason and betrayal of the cause of Palestine by Palestinians and other Muslims nations.

Riyadh has no formal relations with Tel Aviv, but the two regimes have long had clandestine contacts. Under bin Salman, Saudi Arabia’s de facto leader, the kingdom has stepped up its overtures towards Israel.

Saudi Arabia reacted cautiously to the Israel-UAE deal, saying it will stand by a 2002 Arab peace initiative on the Israeli-Palestinian conflict, without condemning the agreement that has angered supporters of the Palestinian cause.

In a recent interview with CNBC, Kushner, however, said it was inevitable that the Riyadh regime would follow suit in forging ties with Israel.

“I do think that we have other countries that are very interested in moving forward,” he said, adding, “And then, as that progresses, I do think it is an inevitability that Saudi Arabia and Israel will have fully normalized relations.”

In highly controversial comments during an April 2018 visit to the US, Saudi Crown Prince Mohammed bin Salman told the Atlantic that he recognized Israel’s “right to exist”, distancing himself from the kingdom’s longtime policy of opposing Israeli occupation of Palestinian territories.