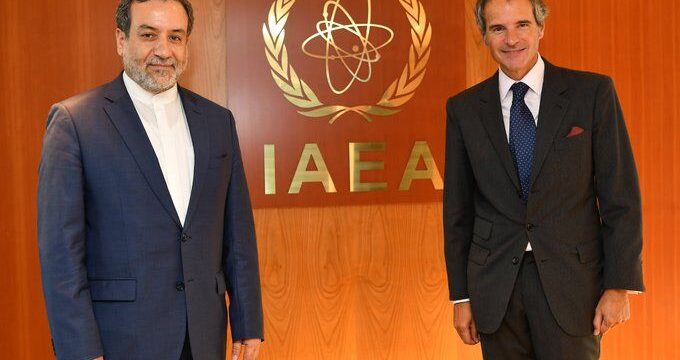 IRNA – Director General of the International Atomic Energy Agency Rafael Grossi in a message referred to his Tuesday meeting with Iranian Deputy Foreign Minister for Political Affairs Abbas Araghchi in Vienna, saying cooperation between Iran and the IAEA must continue.

“Good to meet with Deputy Foreign Minister of Iran @araghchi after my visit to Tehran. Our work must continue,” Grossi wrote in his Twitter account on Tuesday.

Iranian Deputy Foreign Minister Abbas Araghchi arrived in Vienna on Monday to attend the JCPOA Joint Commission meeting which will was held today.

Iran and the IAEA released a joint statement on August 26 in which they stressed agreement to further reinforce their cooperation and enhance mutual trust to facilitate the full implementation of Iran’s Comprehensive Safeguards Agreement (CSA) and the Additional Protocol (AP) thereto, which is provisionally applied by Iran since 16 January 2016.

Based on the statement, the IAEA will continue to take into consideration Iran’s security concerns, by protecting all safeguards confidential information in accordance with the IAEA Statute, the relevant provisions of the CSA and the AP, and the established IAEA confidentiality regime, standards and procedures.

Grossi’s recent visit to Tehran, which was faced with Western pre-meditated media hype in the aftermath of the US defeated approach with the UN Security Council on so-called snapback of the UN sanctions on Iran, led to issuing a joint statement in which the demands of the both sides are taken into consideration.

The talks and meetings between IAEA chief and top Iranian officials, including President Hassan Rouhani, indicated that Iran is completely ready to hold any kinds of negotiation within the framework of regulation.