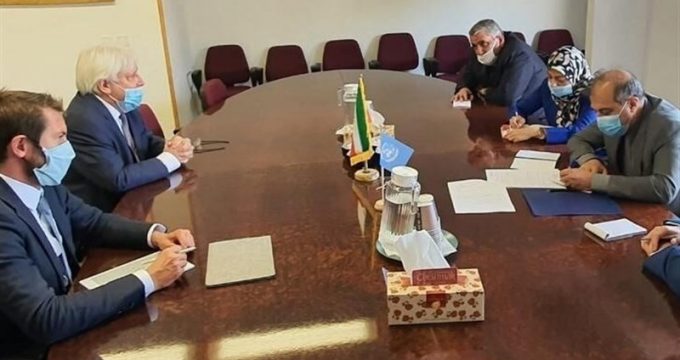 Tasnim – A senior Iranian diplomat and the UN special envoy for Yemen discussed the latest developments in the Arab country at a meeting held in Switzerland.

In the Wednesday meeting held in Geneva, Ali Asghar Khaji, senior assistant to the Iranian foreign minister, exchanged views with UN Special Envoy for Yemen Martin Griffiths on the establishment of a ceasefire in Yemen and the peace trend in the country.

Reiterating Iran’s backing for the political settlement of the Yemen crisis, Khaji highlighted Tehran’s constructive efforts to help put in place a nationwide ceasefire, fully lift the blockade on the country and advance the peace process.

The Iranian official also underscored the need for the UN to press ahead with its efforts to settle the Yemen crisis in a fair and realistic manner, restore the Yemeni nation’s rights, stop bloodshed and the killing of innocent people, and lift the sanctions slapped on the country, especially at a time of the coronavirus pandemic, according to the Foreign Ministry’s website.

The UN envoy, in turn, touched upon his recent trip to the region, and expounded on the United Nations’ recent efforts to draw up a draft joint statement.

Iran maintains that the Yemeni crisis has no military solution, describing the establishment of a lasting ceasefire as a prelude to the launch of political process to resolve the crisis in the Arab country.