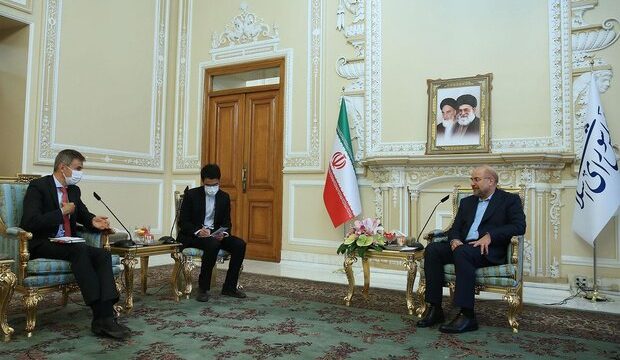 Hadn’t been for Gen Soleimani, ISIL would have reached Europe

MNA – The Iranian Parliament Speaker hailed the role of martyr Lieutenant General Ghasem Soleimani in the fight against ISIL terrorists.

“ISIL would have reached the heart of Europe if it was not for Martyr Soleimani’s efforts,” Mohammad Bagher Ghalibaf in a Monday meeting with Swiss ambassador to Iran Markus Leitner.

Ghalibaf added that the Iranian people gave a good response to Trump’s crime in assassinating the “hero of the fight against terrorism”. The Iranian general was assassinated by the order of US President Donald Trump in early January 2020 in Baghdad.

“Today Trump has understood that its maximum pressure was not effective and Iran’s economic conditions will improve in the coming months and years,” added the head of the legislative branch.

America is putting pressure on ordinary people by its cruel sanctions, he said. “US thought these pressures could ignite internal problems in Iran but it was a simplistic thought.”

Iranian people have always stood against foreign interference and the notion has become one of the fundamental principles of the national culture, he said.

Pointing to the history of positive relations between Iran and Switzerland, he said that the volume of trade between the two countries using the Swiss Humanitarian Trade Arrangement (SHTA) should be improved.

The ambassador, for his part, pointed to the democracy in Iran, saying, it is the Iranian people who decide on their future.

The SHTA is active but it should further be improved, Leitner said. He also expressed Switzerland’s readiness to boost parliamentary ties with Iran.