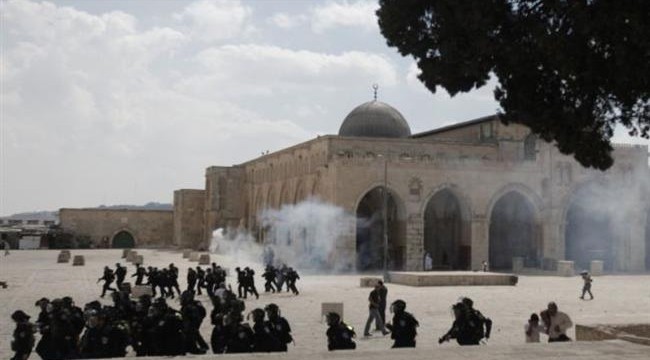 FNA – Iranian Foreign Ministry Spokesman Saeed Khatibzadeh said half a century after Israel’s arson attack on the al-Aqsa Mosque, “the innocent Palestine” is still burning in the fire of Israeli incursion and some Arab rulers treason.

“Today is the World Mosque Day. It’s been 51 years since Zionist extremists set fire to al-Aqsa Mosque – the first qibla of Muslim people, a common heritage of human beings, and a symbol of unity among all monotheistic religions,” Khatibzadeh wrote on his Twitter account on Friday.

“The innocent Palestine is still burning in the fire of the Zionist regime’s impudence and incursion and the treason of certain Arab rulers,” he added.

Khatibzadeh’s Twitter message was issued on the 51st anniversary of Zionist extremists’ arson attack on the al-Aqsa Mosque.

On August 21, 1969, the mosque was set on fire by an Australian settler in coordination with Israeli officials and military forces. The fire gutted the southeastern wing of the mosque.

The World Mosque Day has now turned into an annual occasion when Muslims around the world highlight the importance of the al-Aqsa Mosque as the third holiest site of Muslim world.

US President Donald Trump on Thursday announced a deal brokered by his government between Israel and the UAE which he said would lead to full normalization of ties between the two.

Iranian President Hassan Rouhani decried the recent normalization deal between the UAE and Israel, describing it as a gift to US President Donald Trump before elections.

“These days we have faced a neighboring country which has approached the enemy of the Islamic world and the region and the murderer of the Palestinian nation in a decision to get close to the Zionist regime,” Rouhani said, addressing a meeting of the national coronavirus campaign headquarters in Tehran on Saturday.

He added that the UAE rulers are wrongly thinking that their security and economy will improve through relations with Israel, noting that the measure is aimed at helping Trump win the November elections.

“(The UAE’s) measure is one hundred percent wrong and condemned,” Rouhani said.

He warned the regional states not to pave the way for Israel to have a foothold in the region.

In a relevant statement on Friday, the Iranian foreign ministry strongly condemned the UAE’s decision to set up diplomatic relations with “the Zionist regime of Israel” and termed it as a strategic act of idiocy by Abu Dhabi and Tel Aviv which will undoubtedly result in the further reinvigoration of the axis of resistance in the region.

The statement further stressed that “the oppressed nation of Palestine as well as other freedom-seeking peoples worldwide will never forgive the sin of normalization of the ties with the occupier and bloodthirsty regime of Israel and also the act of those who approve and cooperate with its crimes”.

Undoubtedly the innocent bloods shed during the past seven decades of resistance to free the sacred land of Palestine which is Muslims’ first Qibla will sooner or later take those that betrayed the Palestinian cause by the throat, it added.

The statement also stressed that the Islamic Republic of Iran considers as dangerous Abu Dhabi’s act of normalizing ties with the fabricated, illegitimate and anti-human regime of Israel, and warns the Zionist regime against any kind of meddling in the Persian Gulf region’s equations.

The UAE administration and all other governments which approve of this move should be ready to take the responsibility of all the consequences of such a measure, it further said.

The Iranian foreign ministry’s statement also noted that the history will definitely demonstrate how this strategic mistake by the Zionist regime and the dagger which stabbed both the Palestinian nation and the Muslim peoples in the back will backfire and further strengthen the resistance axis by enhancing unity and solidarity against the Zionist regime and the backward governments in the region.

The foreign ministry advised those rulers who, from inside their “glass castles”, hatch plots against the Palestinians and other regional oppressed nations, including Yemen, to regain consciousness and stop erring in distinguishing between friends and foes.