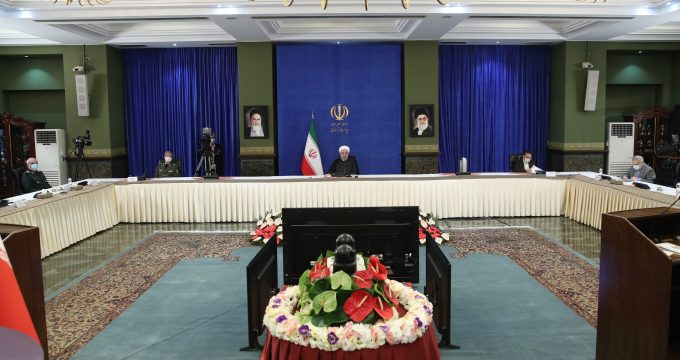 IRNA – President Hassan Rouhani, speaking on the occasion of Iran’s National Defense Day on Thursday, said that in the past five years, the country has moved up in defense power from rank 23 to 14.

Speaking in a ceremony of unveiling Iran’s most recent defense achievements that was held online, President Rouhani said that today’s inaugurations showed that Iran is trying to achieve step-by-step progress in the defense industry.

He said that fortunately, Iran has made great progress in military vision and the country looka at the enemy from long distance and great height.

President Rouhani added that the Iranian radars have enhanced the country’s eavesdropping and vision powers. Also, drones’ vision has been improved vision.

Praising the missile power of Iran, he said, that was an Iranian missile that downed the stealth US RQ-4 over the Persian Gulf.

The Iranian president also said that cruise missiles are of great importance to Iran. “Cruise missiles can camouflage better and hit the target more precisely.”

President Rouhani said the range of Iran’s marine cruise missiles has reached from 300 kilometers to 1,000 kilometers in only two years, which shows Iran is self-sufficient in this issue.

The Iranian president also said that a great job has been done in defense; the country should make its airspace more and more secure.

Reassuring the neighbors that Iran’s defense power will serve them too, he said that Iran does not intend to attack or occupy any country, or hurt any people and that Iran will use this power to defend its friends as well.

President Rouhani went on to say that in the past 40 years, Iraq, Afghanistan, and Kuwait were attacked and occupied.

Despite all the ups and down, Iran has not changed its decision; Iran’s military strategy is based on defense and deterrence, he added.

Also a light-weight fourth-generation turbofan engine that is used in advanced drones was put on display. The engine will remarkably boost the Iranian aviation power and upgrade the engine of drones at least for one generation.

To honor four decades of self-sacrifice and efforts of Defense Ministry staff, Mordad 30 (August 20)­­ has been named the National Defense Industry Day in Iran.