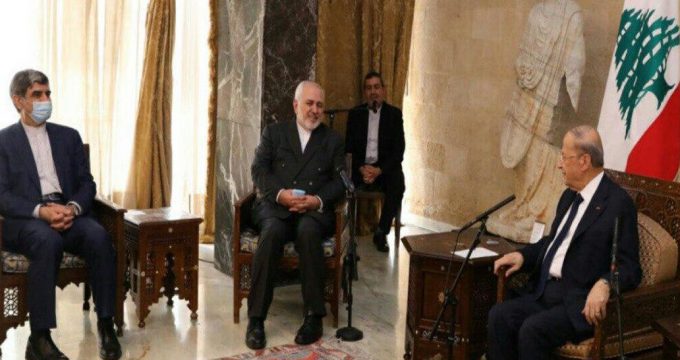 IRNA – Iranian Foreign Minister Mohammad Javad Zarif in a meeting with Lebanese President Michel Aoun in Beirut expressed hope for maintaining stability in Lebanon by cooperation of all political parties.

Zarif offered sympathy and solidarity with Lebanese president and people over recent explosion in Beirut port.

Extending congratulations on the 14th victory anniversary of Lebanese army and Hezbollah resistance movement in the 33-day war of 2006 against the Zionist Regime, Zarif described it as sign of Lebanese people’s overcome against difficulties.

He stressed continuation of Iran’s help to Lebanon.

Meanwhile, Aoun appreciated Zarif for his solidarity with regard to Beirut explosion.

The Iranian foreign minister arrived in Beirut late on Thursday for talks with senior Lebanese officials.