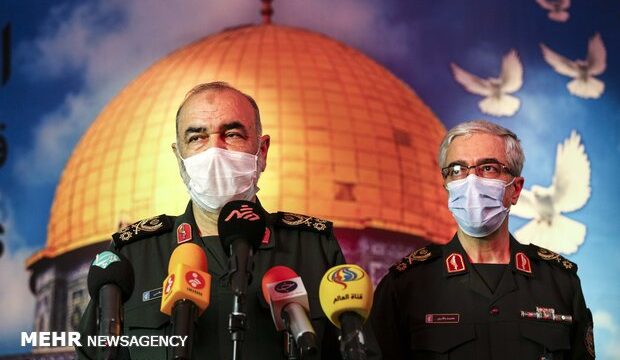 MNA – The Chief Commander of the Islamic Revolutionary Guards Corps (IRGC) said that the Islamic Republic of Iran will continue the path of Martyr Lt. Gen. Soleimani until expelling enemies from Muslims’ land and territory.

Speaking on the sidelines of the inaugural ceremony of Panorama Museum of Martyr Lt. Gen. Soleimani’s Resistance on Tue., Major General Hossein Salami reiterated that the country will continue the sacred path of martyr Gen. Qassem Soleimani with perseverance until full expulsion of enemies from Muslims’ lands and territories.

The misconception of enemies in their calculations, strategies and estimates towards the great nation of Iran is this that they think that movement of revolution stops with the martyrdom of great men but historical facts over the past forty years have always shown that resistance and defense of great nation of Iran and other Muslim nations will be more strengthened instead, he stressed.

“Today, we witness the path of resistance has been strengthened more than before especially after the martyrdom of Lt. Gen. Soleimani and even, revenging the blood of martyr Gen. Soleimani has been turned into a cause and ideal,” IRGC chief commander highlighted.

Major General Salami reiterated, “not only we will take revenge of perpetrators of assassination of martyr Gen. Soleimani harshly, but also will we continue the sacred path of Gen. Soleimani with perseverance until liberation of Al-Quds, complete annihilation of enemies of Islam as well as expelling them from Muslims’ lands and territories.”