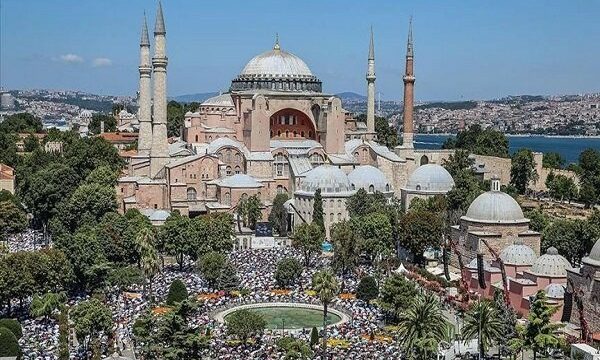 MNA – The Secretariat of World Assembly of Islamic Awakening (WAIA) issued a statement, calling the reopening of Hagia Sophia Mosque in Turkey after 86 years as a courageous step taken in return of Islamic heritage to Islamic World.

The full text of the statement is as follows,

The Crusades coincided with a period in history that many thinkers such as French Gustave Le Bon confess that East is the Cradle of Civilization and coincided with the heyday of Islamic civilization, the Crusades were detrimental to Muslims throughout the world due to lack of culture and Crusaders’ lack of enjoyment of manifestation of civilization.

At the same time, the fertility of the tree of culture and civilization among the Islamic nations caused Europeans to return home with a hand full of knowledge and progress but in the face of, perhaps, the most important consequence of the Crusades was the domination of their soft power over Islamic societies. Their crimes in capturing Al-Aqsa Mosque, destroying mosques and burning relics of Islamic civilization and looting the wealth of Muslim nations, as well as the massacre of tens of thousands of Muslims in a long history of about one hundred and eighty years and in eight periods of invasion of Islamic lands have been a part of this historical disgrace inflicted to the Crusaders.

Despite these crimes and destruction of the vast infrastructure of the Islamic world by the West in the Crusades, Islam not only did not destroy the relics of Western civilization in these wars but also preserved cultural activity by preserving churches and turning them into Islamic places of worship. In general, Islam contributed to cultural interaction and the continuation of human civilization greatly.

The 1,500-year-old Church of Hagia Sophia is a remnant of the Byzantine Empire and one of the architectural symbols of the Eastern Roman period. After the early developments of the Renaissance and the conquest of Constantinople (present-day Istanbul) by Sultan Muhammad the Conqueror in 1452, the Hagia Sophia Church was turned into a mosque and place of worship for Muslims while respecting the rights of all Christians in the world and people of the Roman Empire, among whom Islam had gradually been spread.

For five centuries, the Hagia Sophia was one of the most important cultural heritage sites in the Islamic world but the British colonialism, which had been inflicted a severe blow by Muslims in these five centuries, turned place of worship of Muslims into a museum.

According to the divine laws and traditions, the enemies sought to extinguish the divine light which returned to the Muslims with the growth of Islamism and Islamic awakening in the second and third waves and raising awareness and insight.

In the blessed days of the first decade of Dhu al-Jijjah, when pilgrims seek to revive their nature, the Turkish government and especially President of this country Recep Tayyip Erdogan, in a courageous and praiseworthy act made up his mind to revive Islamic identity and restore the Islamic heritage to the Islamic World.

While supporting the intelligent action which is a sign of wisdom and confronting the cultural domination of the West, the World Assembly of Islamic Awakening respects the revival f the Muslim entity, preservation of dignity and cultural heritage and cordially requests all Muslims around the world to support and back this wise move taken wholeheartedly.